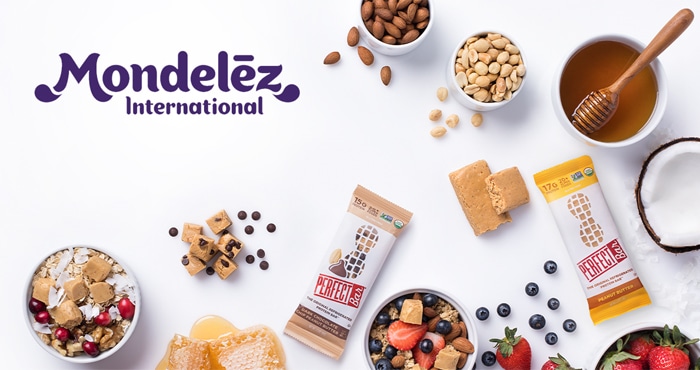 Financial terms of the deal were not disclosed, but Perfect Bar senior leadership, including siblings Bill, Leigh and Charisse Keith, will continue to operate the business from its headquarters in San Diego and will retain a significant minority equity interest in the company. Moving forward, Bill Keith (Perfect Snacks CEO) and Leigh Keith (Perfect Snacks President) will report into Glen Walter Mondelez EVP and President of North America.

According to a release by Mondelēz, in 2018 Perfect Snacks generated roughly $70 million in net revenue. The brand is in roughly 27,000 doors including Whole Foods Market, Trader Joes, CVS, Hy Vee, Publix, Kroger banners, Starbucks and Costco.

Founded in 2005, Perfect Snacks was inspired by a recipe created by Bud Keith, the patriarch of the Keith family, who was an expert in fitness and nutrition. In 2005, with Bud Keith ill with cancer, siblings Bill and Leigh Keith — at the time in their early twenties — decided to commercialize his recipe and start Perfect Snacks in order to defray medical expenses.

After years of Bill Keith sleeping in his van and demoing his Perfect Bar in grocery stores around the country, the company gained traction and in 2015 closed investment from CPG focused private equity firm, VMG.

Over the past year, Perfect Snacks has broadened its portfolio, moving from its full size bars to children’s bars (with a different formulation and size) last fall. Earlier this year the company introduced a multiformat container of Perfect Bites to fill more snacking occasions. Perfect Snacks was an early adopter of e-commerce, launching numerous limited-edition bars sold solely through their website. The company previously produced its own bars out of its San Diego facility, but has since transitioned that production space to an R&D kitchen and turned to co-packers on the East and West Coasts. According to Perfect Bar, those co-manufacturing partners will remain in place moving forward.

Although the refrigerated bar set has seen rapid growth over the last several years, with many new competitors entering the market, the category still struggles with issues such as supply chain and slotting, with placement in store varying from banner to banner.

According to Mondelez, in the U.S. the broader category of “refrigerated snacks” generates $20 billion in annual sales and accounts for a third of the total snacking market. The smaller sub-segment of “well-being snacks” (which include nutrition bars, nut and fruit packs, yogurt and hummus) delivers roughly $7 billion in sales, Mondelez noted in the release. The segment is growing faster than other refrigerated snack segments, seeing roughly 8% growth over the last three years.

The deal comes just over a year after Mondelez acquired cleaned-up cookie brand Tate’s for $500 million and four years after its acquisition of free-from snack producer, Enjoy Life. In 2016 Enjoy Life launched its own line of protein-enhanced bites. The snack conglomerate has spent the last year particularly working on revitalizing its innovation pipeline, launching incubation and venture arm Snackfutures, and finding new ways to offer consumers cleaned up snack offerings.

“We have a mission to lead the future of snacking by offering the right product, for the right moment, made the right way,” Walter said in a release. “[Perfect Snacks is] a great complement to our existing portfolio that expands our leadership across broader snacking.”