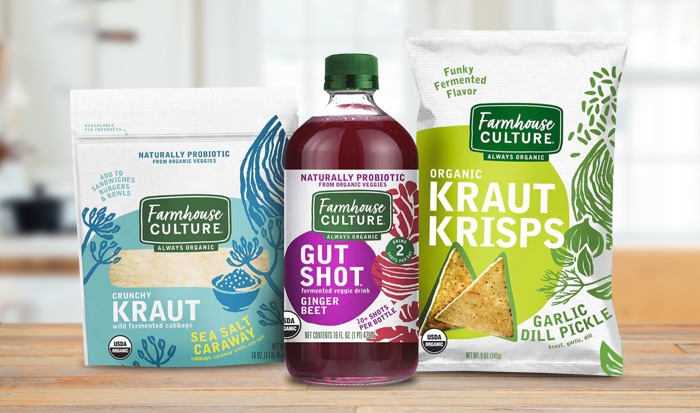 Farmhouse Culture has gone back to basics in order to grow. Over the past eight months new CEO Scott Lerner has revamped the fermented food business — including a new look, new headquarters, and a shift away from in-house production — in an attempt to move beyond its natural channel roots.

“We’ve totally retooled the business,” Lerner told NOSH. “We have a new team in place across all disciplines and we’re relaunching the brand with new packaging, new flavors for the kraut, new formulations and just getting ready to run really hard and inject some life into the business.”

The brand’s new approach begins with the new packaging, which will roll out over the next month. In an attempt to move away from what Lerner called “natural foods cliches,” the revised branding eschews Farmhouse’s previously black, minimalist aesthetic for a more vibrant design on a white background. There’s also a new call-out front and center proclaiming that Farmhouse is “always organic,” which, Lerner said, consumer research found was an indicator of quality to shoppers.

The company also adjusted packaging copy to decrease its emphasis on probiotics. Although many consumers are familiar with the broad concept of gut health, Lerner said, they still are confused as to what that means and how to achieve it. According to research firm Mintel, only 39% of U.S. consumers say they “try to include probiotics in their diets” while 33% are “interested in dishes with ingredients that have digestive benefits.”

While the term “probiotic” still remains, more attention and space are devoted to flavor descriptors and usage occasions. The goal, Lerner said, is to quickly catch consumers’ attention and encourage trial.

“They’re very good products, but they’re not mapped in a conventional way like cauliflower [products]…This is just straight up cabbage, and it weirds some people out,” Lerner said. “[We] tried to leverage the complexity of the product creation process too much and most consumers just don’t get it.”

While Gut Shots and Kraut will sport the refreshed branding, the shift for Kraut Chips will be delayed while the company adjusts the recipe and production method. Lerner told NOSH the new chips will no longer have added powdered probiotics and will no longer contain a front-of-pack probiotic claim; instead, it will emphasize gut health through the product’s natural fiber content. The change is part of Lerner’s larger strategy of focusing on cleaner products that could emerge from any home kitchen.

“We’re not into sprinkling stuff on our products,” Lerner said. “What the previous regime did was take a chip that had some sauerkraut in it and tried to mainstream it with flavors like White Cheddar and Garden Vegetable. Where we want to get back to is a true sauerkraut chip.”

Farmhouse has also added an “Old Fashioned” plain kraut to the lineup, part of an effort to create a clearer link to traditional jarred or canned kraut.

Lerner said the company is also making changes to operations and staff, thanks in part to a recent investment. Farmhouse closed a small round of capital earlier this year from existing investors including 301 inc., Renewal Fund, and Advantage Capital to support some of these moves. Since its founding in 2008, the brand has raised over $18 million, including an early 2018 round of roughly $5.7 million.

The company has also had a substantial structural change. For years it had produced its sauerkraut and gut shots at its plant in Watsonville, Calif. But roughly a week ago, Farmhouse closed the 26,000 square foot facility, ending a months-long process in which it auctioned off its factory equipment and laid off its production employees.

Lerner said the production changes came down to capacity and costs, as the brand is outgrowing its current facility and the price of expansion too high.

Production of the two lines has shifted to copacker Great Lakes Kraut Company (GLK Foods) in Appleton, Wisconsin, which is the nation’s largest producer of sauerkraut. While GLK copacks for many fermented foods brands, it also produces its own lines of both jarred and canned shelf stable sauerkraut — the very product Lerner wants to turn consumers away from.

Along with the production move, Farmhouse also shifted its chief cabbage supplier from Lakeside Organic Gardens in Watsonville to a GLK owned farm — which is growing organic cabbage for the brand — and shifted its headquarters from Portland, Oregon to Evanston, Illinois, where Lerner resides.

There has been staff turnover as well, with some long-time employees departing the brand. According to LinkedIn, over the last eight months, Farmhouse’s VP of innovation, CFO, director of sales, director of brand strategy, and customer service manager have all moved onto new companies. Lerner, meanwhile, has brought in Melissa Hauser, former director of sales for Coca-Cola’s Venturing and Emerging Brands (VEB) unit as the company’s new VP of sales, along with new sales team members from RXBar and PepsiCo.

The retooled Farmhouse’s first test will come over the next few months as it beefs up its presence in mass and conventional retailers . Currently Farmhouse is sold in 5,000 stores, largely natural chains such as Sprouts, New Seasons, Fresh Market, Earth Fare and Whole Foods. But the brand added its first Kroger banner (QFC) in June and will launch into 200 Walmarts this month, expansions that will help indicate if the new brand resonates with conventional shoppers.

Farmhouse will face the challenge of competition in a fermented foods category that has grown significantly since the brand launched. For example, upstart brand Cleveland Kraut, which added over 1,500 new stores in just the last six months, is already in 3,000 doors — including most natural retailers as well as conventional players such as Target, Walmart, Albertson’s, Shoprite, Meijer and Giant Eagle. Add in more upscale players such as Wildbrine and private label offerings from retailers, including Whole Foods, Trader Joe’s and Wegman’s, and a category that still has limited shelf space begins to look rather crowded.

And while kombucha and other fermented beverages have enjoyed widespread consumer acceptance and sales growth, Gut Shot, which is made from sauerkraut byproducts, may prove harder to explain to shoppers. Lerner said that demoing and sampling will be the keys there.

The brand will spend this year largely focusing on distribution and sales, as well as exploring other cold-chain products. Although Lerner said though the brand is easily extendable, he wants to first fully understand the size of the market and how far Farmhouse can leverage each existing line.

“It’s about making sure you have the right SKUs for the right accounts and [that] you don’t push too far too fast. We’ve made mistakes in some of the accounts we’ve gone into that had [products] that just weren’t going to be successful,” Lerner said. “In order for the category to grow, you need to bring in more users and more channels.”