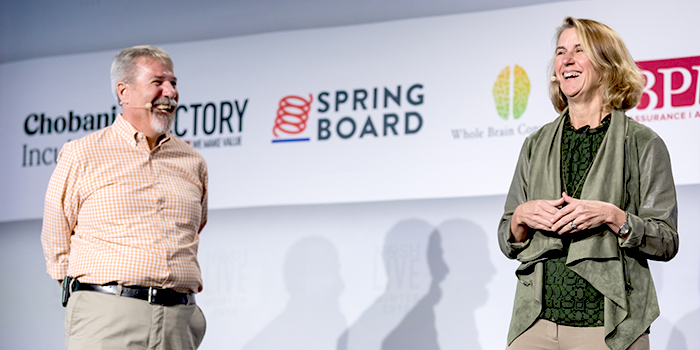 While the theme of day one of NOSH Live Winter 2018 was how to “grow the tribe” by bringing new consumers into the natural food space, the conference’s second day further explored the question by examining how brands can define themselves to stand out and thrive when the tribe is reaching record numbers by the cycle. Throughout the day’s presentations, entrepreneurs, investors, analysts, and executives all gave their perspective on how to innovate, differentiate, and navigate in a rapidly changing industry.

In the first presentation of the day, SPINS EVP of retailer services Kathryn Peters and IRI principal Brian Reed took a look at the “conveyor belt” like growth of the natural and organic food sector, which has grown from a $68 billion space in 2010 to more than $133 billion today. Household penetration for organic foods is at 84 percent, while penetration for natural products has reached a whopping 99 percent, the pair said (equivalent to the penetration for toilet paper). As the natural food spaces continue to speed up I Love Lucy style, the challenge ahead lies in the broadening umbrella for natural and clean label products — encompassing everything from plant-based to paleo to vegan to allergy free and beyond.

Furthermore, changing consumer attitudes have created an environment where shoppers are actively avoiding mass market brands and seeking instead to identify with items that embrace artisanal and craft production.

“We need to see and understand where heritage and where small batch and artisanal-feel needs to [be part of] your brand,” Peters said. “It’s not cool to be mass market anymore. There’s a real question — it’s hard for a mass market brand to create a craft approach.”

Following Peters and Reed’s market analysis, Simple Mills founder and CEO Katlin Smith took the stage to discuss how to build a brand with that proper artisanal feel and how to create an internal company culture that will help it to succeed. Smith spoke about the importance of motivating team members to deliver their best performance by creating an environment that recognizes the value of their work. “Usually when people try to alter the outcome they try to alter the individual,” she said, adding that rather than attempting to critique a person into changing, it is more effective to change the organizational structure around them.

Next, Real Good Foods CEO Bryan Freeman spoke to the changing face of the food space, and how major CPG companies are taking their cues from small, natural brands– not the other way around. 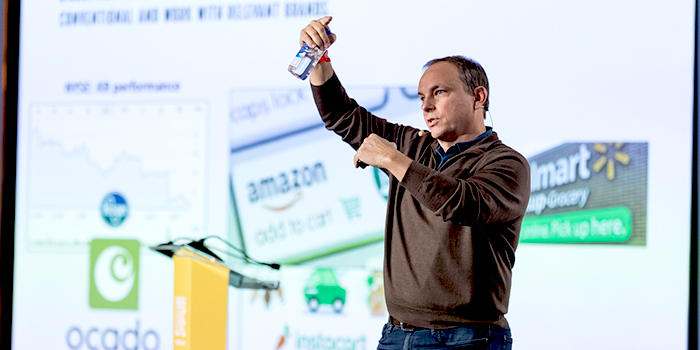 “If you’re a marketing brand manager of some large CPG company you’re being pushed down, because natural is coming in and redefining ‘best,’” he said. But beyond product development and branding, natural products, he added, are winning in the online space where they’re attracting larger social media followings and creating strong digital-first business models. Freeman’s advice for new brands just entering the space was to start with an online direct-to-consumer model and worry about retailers after establishing demand for the product.

After a networking break, Late July Snacks founder Nicole Bernard Dawes discussed her journey as an entrepreneur and the tough decisions founders need to make in order to survive. Founded as a cracker brand and later adding cookies, Late July’s first seven years saw the company grow to about $8 million in annual sales. But after the sudden death of her business partner — her father — the company needed to make radical changes to survive. In 2010 Late July discontinued its cookie line and released a line of tortilla chips. The decision paid off and sales skyrocketed from $8 million to more than $130 million in 2018. While one key takeaway wass knowing when to kill your darlings, Dawes emphasized the significance of creating trust with the consumer and with your employees by cultivating a strong internal culture.

After Late July, the conversation turned from disruptive brands to disruptive retailers with The Goods Mart’s founder Rachel Krupa and chief merchant Alexander Duong. Krupa discussed creating a unique convenience store that was smaller in square footage, only stocked natural products, and featured livelier branding and design than mainstream competitors. As natural products take aim at mass market CPG companies, Krupa said she believes retailers need to be the ones sowing change in consumer behavior. One tactic the company has taken is to offer consumers seeking mainstream (and less healthy products) like energy drinks a free sample of better-for-you alternatives on the promise that they’ll come back and make purchases later. By pushing consumers towards new and healthier natural products, Krupa said she hopes to one day grow The Goods Mart as large as 7-Eleven.

But it’s not just small companies changing the game. Leslie Miller, director of ice cream for North America at Unilever, delivered insight into how the evolving food industry is leading major players to innovate and adjust. Legacy brands, such as Breyer’s, can help lift new innovations like non-dairy ice cream by launching new on-trend products when appropriate, she said. But brands shouldn’t try to do everything, she warned, noting that it’s important for companies to establish a “North Star” that grounds their goals and values.

“Change is okay,” Miller said. “But stay true to your north star, adapt with consumers in a way that is okay.”

The day ended with a conversation on new models of investment with Samantha Brands Group founder and managing director Michael Silverman and Bias & Blindspots founder Doug Raggio on how investors can take new and long term approaches to working with early stage brands, in contrast to the high pressure of traditional venture capital funding.

“Our investors aren’t looking for the $100 million exit in a year, they have plenty of money,” Raggio said. “They’re looking for long term moderate gains over time. So think of it like a film. Tom Cruise, like him or don’t, he’ll take a smaller fee up front for a larger bid of the box office. That’s the proposition I’m asking founders is give us a little risk investment front and you can have a larger bid of the box office.”