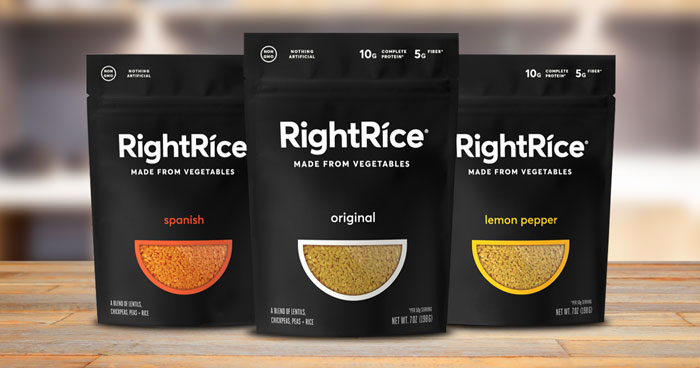 RightRice, which produces a legume-based rice substitute, has a new partner in its mission to to revolutionize an age-old center store category. The brand, which offers consumers a rice substitute made from vegetables (legumes), today announced a $5.5 million investment led by Strand Equity, as well as some high profile social “capital.”

Strand co-founder and managing partner Seth Rodsky was previously an investor (both personally and through Strand) in PopChips, RightRice founder Keith Belling’s last endevor. Rodsky told NOSH RightRice presents a huge opportunity, to disrupt a staple category (rice) that is valued at roughly $3 billion. And despite minimal innovation, he added, four out of five adults has purchased rice in the last three months.

“This isn’t just a disruption play, this is something that combines nutrition and taste, which is something Keith did at PopChips,” Rodsky said. “When you crack that code with such an enormous swim lane, that’s something you jump into.”

Although many of RightRice’s prominent investors have already taken to social media to discuss the brand, both Rodsky and Belling told NOSH that the relationship between celebrities and RightRice is more than a simple product endorsement. All of the investors wrote meaningful checks, Rodsky said, adding that investing in a brand (versus being paid to“promote a product) creates a relationship from where both sides are working to build equity value.

“Both brands have to align, meaning the intrinsic values and the characteristics of the human brands and the product,” Rodsky said. “If they don’t align, consumers are savvy enough to see through it.”

Belling said he didn’t set out to find celebrities to invest in the company, but instead looked for talented “business builders” that could contribute different entrepreneurial skills — especially with brand building. With PopChips Belling built a robust field marketing team that could sample the product but with RightRice, which requires heating, virtual introductions are vital.

“I continue to be a big believer in helping consumers discover a brand and build a meaningful connection and get engaged,” Belling said. “Because at the end of the day, brands like this get built through grassroots.”