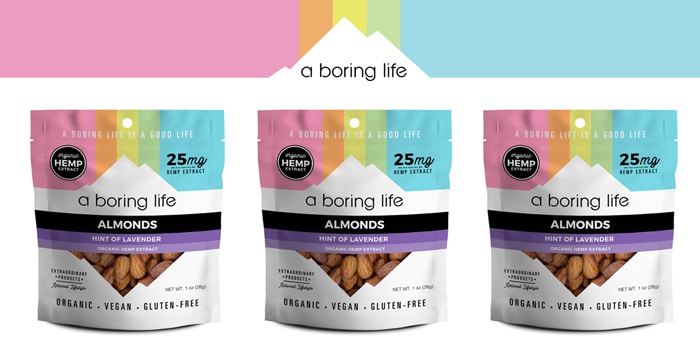 But they didn’t stray far from the farm. Co-founder Serafina Palandech and wife and business partner chef Jennifer Johnson moved to a lavender farm in Boring, Oregon — a town where hemp grows plentifully — to produce CBD-infused nuts and chocolate. The brand is part of the new cohort of ‘seed stage’ companies at cannabis business accelerator CanopyBoulder, which has invested $130,000 into A Boring Life.

Though seemingly distinct categories, Hip Chick Farms and A Boring Life share a focus on sustainable regenerative agricultural practices, Palandech told NOSH, adding that she sees the CBD food business as a “natural evolution,” after running Hip Chick Farms. Sourcing hemp is a lot easier than sourcing organic, ethically-raised poultry, which became a pain point for Hip Chick Farms as the company grew.

“The welfare piece was always challenging in a way I didn’t always anticipate,” she said. “Organic humanely raised chicken is very expensive and difficult to produce.”

With Johnson, formerly sous chef at natural foods stalwart Chez Panisse in Berkeley, CA, at the helm of Hip Chick Farms, the duo created a variety of high-quality frozen products including organic nuggets, turkey patties and meatballs and raised over $2 million in a fundraising round. They also opened a chicken nugget tasting room in 2017, adding a 24-karat golden chicken nugget to the menu in 2018.

Last May, they brought in Nate Morr, former COO of Belcampo Group and president of Sustainable Food Trade Association, as CEO of Hip Chick Farms, Palandech said, and the company was later sold by its controlling VC firm in August.

“The company was moving in a different direction that didn’t need me in the same way,” Palandech said.

The move into CBD is in line with the couple’s values: sustainable agriculture, chef-curated, quality food products, and health and wellness, Palandech said. Plus, she added, the duo wanted to pursue a business, such as CBD, that had stronger margins than the poultry business. With the experience of starting a food business experience behind her, Palandech felt better prepared for launching A Boring Life, and with grocery stores just slowly coming around to selling CBD products, there isn’t as much pressure to rapidly scale the business, Palandech said.

“With Hip Chicks I wanted to grow it very quickly, and with A Boring Life I want to grow it smartly,” Palandech told NOSH. “This time around we’re being very thoughtful about the elements of a brand identity, company, our staff and the partners we’re working with.”

The FDA has stated that hemp or marijuana-derived CBD cannot be added to food products sold across state lines or marketed as a dietary supplement. Further regulation is pending, and a hearing will be held May 31 to discuss the issue. That hasn’t stopped CBD from entering the food and drink business at an ‘astounding pace,’ according to a recent Rabobank report, which also notes 40% of CBD consumers use it for general health and wellness, especially as a mood enhancer. The CBD consumer goods market is expected to reach $16 billion by 2025, according to Cowen.

Palandech and Johnson developed A Boring Life’s product line over six months, including offsite quality control tests, Palandech said, noting that finding the right formulation and consistency for hemp extract, which contains CBD, in food is challenging, and it’s a process she will continue to tweak.

“It’s incredibly exciting, but really difficult because there are no general manufacturing practices in place for farms,” she said. “We’re doing everything we can to follow the regulations; there’s just no definite regulation.”

While some may see CBD as the ‘boring’ cousin of cannabis, Palandech said, the company name is mostly about taking a quiet moment for a healthy snack. The product line includes hemp-infused walnuts and almonds, and the Omega-3 fatty acids in the nuts help the body absorb the CBD, she added.

A Boring Life’s website has been live for about a month, and the products will launch on Amazon within the next couple months, she said. The brand just entered Pacific Northwest-based New Seasons Market and California-based Erewhon Natural Foods, both of which Palandech notes have decided to “go big on CBD.” But moving forward, she hopes to drive the product through larger conventional retail with an MSRP of $5 for Lavender almonds and Sweet & Spicy walnuts and $8 for Dark Chocolate & Sea Salt almonds.

“I think we have the opportunity to really talk to the average consumer across the country to educate them and be a trusted voice,” she said. “We’re chef-curated; I think that we have a really good tasting product.”

With the duo’s food-focused background, Palandech said she views A Boring Life as more of a natural food brand that utilizes hemp as a superfood than as a cannabis brand. But connecting with cannabis-focused companies, including food and drink brands in the CanopyBoulder accelerator and in Boulder itself, has been a huge asset, she added. CanopyBoulder invested roughly $1.4 million into 12 companies, 10 of which are participating in its 16-week accelerator program in Boulder, CO. Aside from A Boring Life, Backyard Soda Co., a natural CBD soda and natural gourmet simple syrup company, is part of the cohort, and CanopyBoulder also invested in Weller, which produces CBD coconut bites and recently launched CBD sparkling water.

“I don’t buy into the whole competition thing. I think we can all lift each other up,” she said.