From a premium chip maker to a fig-filled cookie brand, here are some of the latest redesigns and rebrands in the natural snack set.

Jackson’s Honest: We Want to Show Consumers What is Inside the Bag

Jackson’s Honest — maker of premium, coconut-oil fried potato, tortilla and puffed chip — announced earlier this month that it has undergone a redesign, led by design and consumer research firm Walden Hyde. The new look replaces Jackson’s Honest’s agricultural-based landscape design, with a large photo of each SKU’s main ingredient or actual product. The hope, co-founder Scott Reamer said, is to give consumers a better idea of what they are eating.

The packaging also simplifies much of the front-of-pack descriptor text. Previously, the company tried to educate consumers about its founding story, brand values, production process and ingredients through its packaging. However, Reamer said, he and his wife, co-founder Megan Reamer, realized the messaging was “overkill.”

“At first people didn’t understand why we would want to use the ingredients we do at all, and now more people get it,” Reamer said. “So as the marketplace evolved … we had to adjust our packaging to fit that dynamic with the changing marketplace and changing consumer understanding and knowledge.”

The redesign has already started to roll out for the brand’s tortilla chips, and the puffs and chips will hit stores over the next month, according to the Reamers. Currently, Jackson’s Honest is sold in more than 6,000 stores, including Whole Foods Markets, Sprouts, Natural Grocers and Publix. While much of the company’s distribution is deep within the natural channel, the company said the goal of the redesign is to break through the clutter of the chip aisle and secure shelf space in larger, conventional retailers.

To help fund this growth, Jackson’s Honest recently gained a $1.25 million investment from Rohan Oza in exchange for 15 percent equity while presenting on the Shark Tank reality TV show. The brand is also in the process of closing its first official round of funding in the coming weeks.

Shrooms: We Broadened Appeal and Product Line with Rebrand

Last year, frozen appetizer brand Porta Bela debuted a new line of crunchy mushroom chips by the same name during the annual Sweets and Snacks Expo in Chicago. During this year’s show, the company launched a rebrand of the snack line, Shrooms, as well as new products. The goal, said David Eberwein, head of business development and innovation for Shrooms, is to expand its chip distribution from food service into retail.

Owned by one of the leading mushroom farms in Pennsylvania, the company’s mushroom snacking platform will exist under the Shrooms label and consist of four products: mushroom chips, mushroom snack mix, mushroom snack bars and shiitake jerky. The chips have also been reformulated to give them bolder flavors such as pizza slice, smoky barbeque and jalapeno roasted sea salt.

“We discovered we were doing things with other mushrooms and not just portabellas — whites, crimini, shiitake — so the Porta Bella name was starting not to fit,” Eberwein told NOSH. “We asked ourselves, ‘How do we include all mushrooms that we might choose to use in these products moving forward and also try to create something that has a broad appeal?’”

The packaging itself is more modern and plays to the brand’s tongue-in-cheek name with callouts such as “mind-blowing” flavor.

“Honestly, we chose a name that’s pretty edgy and possibly controversial, so we pushed that a little further with the psychedelic design,” Eberwein said. “It creates curiosity as to what is it, and it’s whimsical so it gets a lot of attention and causes conversation.”

Though currently the brand is not on shelves, Eberwein said Whole Foods has verbally agreed to take on the brand regionally. The chips, snack clusters, bars and jerky will retail for $4.99, $3.99, $1.99 and $5.99, respectfully. Porto Bela will also continue to produce its frozen appetizers.

Figgin Fruit: We Want Our Packaging to Appeal to a Modern Consumer

Snacking company Hello Delicious Brands (HD) has debuted a redesign for Figgin Fruits, its line of fig-filled cookie bites. The goal for the new look was to better appeal to the brand’s core consumers, millennial moms, according to Marsha Green, VP of Marketing for HD.

Designed by Los Angeles-based agency Bright Design, the new packaging emphasizes its namesake ingredient, the fig, aims to better highlight attributes such as its non-GMO verification and callouts of no high fructose corn syrup, artificial colors and preservatives.

“Our education of ‘what is in this bag’ was missing,” Green explained. “There was also no history behind the brand for people to pull from the shelf and recognize the packaging.”

After polling a 750-person panel and evaluating data from consumer analyst Mintel, the company realized it was missing an opportunity in the breakfast bar and snack set due to its packaging size. To better position itself for this snacking occasion, the company launched a box that holds five 1.5-ounce pouches for on-the-go eating. The redesign will roll out on July 1 with the 7 oz. bags, and the on-the-go pouches will follow in mid-August. Figgin Fruit is sold in more than 7,000 stores, including Meijer, Shaw’s, Gelson’s, HyVee, Hudson News, 7-11 and Costco. 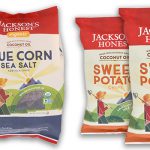 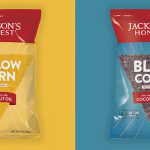 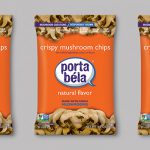 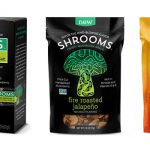 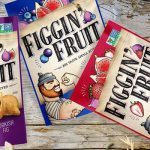 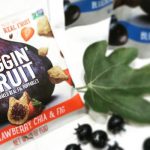