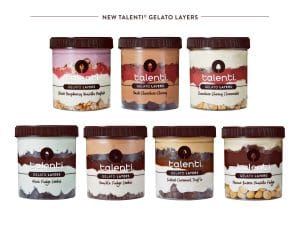 “Talenti Gelato Layers truly brings our commitment to craftsmanship to life,” said Josh Hochschuler, founder of Talenti. “Each Talenti Layers recipe is hand-crafted to include quality ingredients sourced from around the world. Talenti Layers promises a new eating experience for fans as they indulge in each layer.”

“The Talenti Layers range is the most innovative and decadent in the Talenti portfolio,” said Leslie Miller, marketing director of ice cream at Unilever. “We drew inspiration from this line to create a one-of-a-kind experience for consumers – it’s a space that feels as decadent as the jars themselves. We can’t wait for our fans to join us and taste Talenti in a whole new way.”

The full Talenti Gelato Layers range is available in select grocery stores nationwide, at the suggested retail price of $5.49to $6.49 per jar. With these new additions, fans now have 47 total gelato and sorbetto flavors to select from the Talenti portfolio.

Talenti began as a gelateria in 2003 and has since grown into the best-selling packaged gelato in the United States. A wholly-owned subsidiary of Unilever, Talenti is committed to using artisanal methods and uses only the finest, carefully sourced ingredients – Belgian Chocolate, select coconuts from the Philippines and dulce de leche from a classic Argentinian recipe are just a few of the many fine ingredients used to create Talenti gelatos and sorbettos.