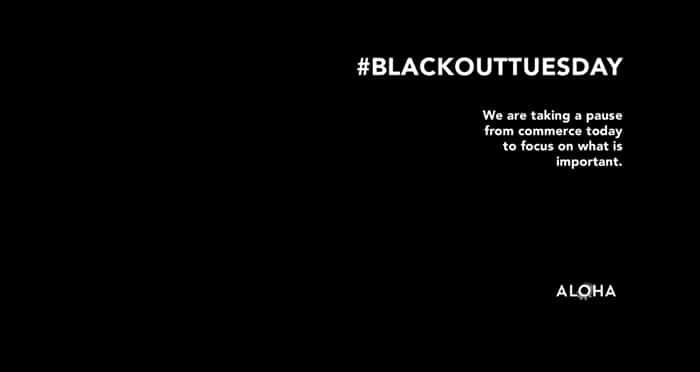 Over the course of several days and nights, mass protests against police brutality have taken place in dozens of major American cities, sparked by the death of George Floyd, an African American man who died on May 25 while being restrained in the custody of four Minneapolis police officers making an arrest.

Floyd’s death, coupled with other documented cases of police misconduct stretching back years, has lifted difficult conversations about racism and systemic inequality to the forefront of public consciousness, resulting in public outcry and, at times, violence. Some of the country’s largest food and beverage companies have taken the unusual step of weighing in publicly on a socio-political issue through formal statements from senior leaders.

PepsiCo CEO Ramon Laguarta released a statement on LinkedIn in which he said he was “heartbroken” by the “grief, anguish, and, in some cases, rage at the injustice infecting so many of our communities.”

“What is happening to Black people on the streets of America at the hands of rogue police officers and individuals is not acceptable. What’s worse is that these appalling and horrific crimes keep happening,” he wrote, listing the names of recent victims Ahmaud Arbery, Breonna Taylor, Philando Castile, Sandra Bland, Laquan McDonald, Mike Brown, Eric Garner and Oscar Grant.

“I am proud that our company has been open to having these courageous conversations, and we will continue to hold more of them—formally and informally.”

In a message to employees, Coca-Cola CEO James Quincey said the company “stand[s] as one with our employees, business partners and communities in rejecting racism and discrimination. We share their anger, fear, sadness and disappointment over the lack of progress in protecting Black Americans and people of color from acts of racism and injustice.” He announced that, in the coming days, senior company leadership, including Coca-Cola North America president Jim Dinkins and Chief Diversity & Inclusion Officer Lori Billingsley, will host a “Stand As One” discussion about racism, injustice and “what we can do as a Coca-Cola community to create change.”

“We are committed to taking steps to eliminate the repeat of events like this in our society and committed to investing in substantive change in our organizations and the communities we serve to address racial inequities and social justice.”

Other brands have been even more outspoken about the issues they believe are at play. KIND chairman and founder Daniel Lubetzky shared on LinkedIn a note to employees in which he began by discussing the political environment that has contributed to this situation.

“It is terrifying to look on as our leadership fails to take appropriate actions to ensure justice, to heal wounds, to address the fundamental problems giving rise to these conditions, and to build bridges among all of us,” Lubetzky wrote. “The underlying conditions that are causing all these frictions are not going away anytime soon. If anything, they are being deepened and exacerbated by political divisiveness, lack of empathetic leadership, tribal divisions fomented and aided by foreign governments seeking to undermine American democracy, mounting extremism on all sides, and fundamental economic and social inequities that are rising by the day.”

Today many brands posted a black square to their Instagram feeds in solidarity with racial justice activists, part of the social media awareness campaign called #BlackOutTuesday started by the music industry.

Taking a broader approach to the initiative, protein brand Aloha took down its entire website and ecommerce platform for 24 hours, replacing the site with a single black page stating that the company would be “taking a pause from commerce.” CEO Brad Charron said that he has struggled over the last few days with finding a path forward, but ultimately believed that the company needed to make a strong statement that it was not simply business as usual. 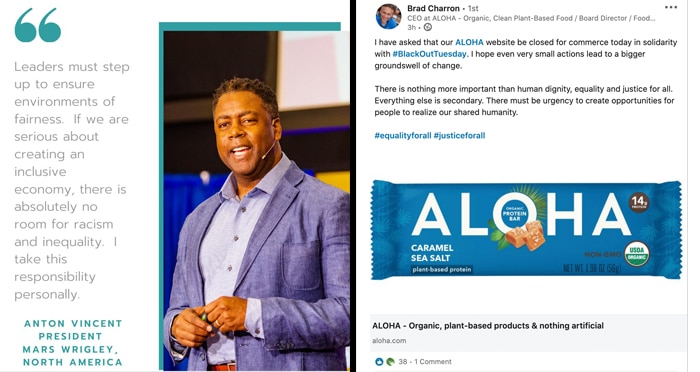 “How do you strike the right tone that you’re shocked and abhorred with everything that’s going on and that you believe in your heart of hearts,” Charron said. “At the end of the day, we’re a healthy food and beverage organization, we’re not a political organization…The only thing I could think about was ‘this is not normal and we have to signify that.’ And maybe a small act can propel a bigger conversation?”

Charron added that this move is not about sacrificing sales, but rather giving up the brand’s own space in favor of an important discussion. He added that “traditional CPG wisdom” would be to reserve comment because “there’s no gain,” with consumers either replying that a brand hasn’t done enough or shouldn’t have done anything at all. However, in his opinion, this can no longer be an excuse for inaction.

Still other companies have elected to donate profits or sales over a certain period of time towards various causes, including the NAACP Legal Defense Fund, George Floyd Memorial Fund, Color of Change and African People’s Education and Defense Fund, Reclaim the Block, the Equal Justice Initiative, Black Lives Matter and others.

For hot sauce brand TRUFF, the movement has brought about a larger discussion about what has been “borrowed” from Black culture. The company, which has even been featured in a music video by rapper YBN Cordae, posted on social media that the company recognizes it has “taken inspiration from streetwear and urban culture” in developing the brand and its marketing. In response, the company has donated $10,000 to the NAACP “in the fight against racial discrimination and police brutatality.” Co-founder Nick Ajluni said that the brand works to appeal to a wide audience but recognizes that it owes much to the community — just as, he added, any other brand that pulls from modern day pop culture.

We’ve taken inspiration from Black and Urban culture…but more importantly, we all do. The whole country does,” Ajuni said. “I think Hip Hop is the number one genre in the world right now and these are the things that drive everything, we just don’t always realize it. So everyone wants to take the good but not acknowledge the bad things that are always happening to the community”

Kevin Moran and Matt Lombardi, the co-founders of CBD brand Beam, have taken donations a step further: not only will the company donate $10,000 towards Black Lives Matter, but both CEOs have also elected to donate 10% of their salaries from the month of June to the cause.

“We’re such believers that you have to lead by example,” Lombardi said of the donation. “For us [it’s about] how do we bring attention to something that’s really important in the world, but at the same time, what actions can we take to support this not just with words.”

Lombardi added that he hopes that the co-founders’ efforts will motivate other brands and show that even the founder of an emerging startup can donate. “We were able to give, so we wanted to give,” he said.

For brands based in Minneapolis, there’s an additional layer of trying to care for their own employees on top of the larger conversation. Fred Haberman, founder of sauce brand Freak Flag and Minneapolis PR firm Haberman, said he feels “a deep sadness.” Haberman added he has spent years working to improve food inequality — previously launching (and selling) Urban Organics, an aquaponic agricultural community that was based in a Minneapolis ‘food desert.’

Yet despite dealing with his own business — the Haberman office is currently boarded up as a safety measure — the company has invested significant time towards planning for how it can change everything from recruiting employees to the structure of its client base moving. Today, Haberman said, he spent hours in a staff meeting discussing how the agency could support these efforts.

“First and foremost you’re concerned about the wellbeing of the community and your individual employees. It’s a war zone and there are areas of the city that are damaged. Then you have this feeling of true sadness that is related to the injustice.” Haberman said. But there’s a need to speak out, he said, adding, “Silence is violence.”

Finding a path forward can be tricky for brands, with concerns that making a statement may be seen as pandering or appropriating a movement as a marketing tool. However, what matters most to consumers is action, said Sabina Gault, founder and CEO of Konnect PR agency. While monetary donations are a clear option, there are also more creative solutions for smaller brands. One of Gault’s clients is turning their social media account over to creators from underrepresented groups.

“People don’t care what I have to say, people care about what I do. Because I can say whatever I want to say, but if I do absolutely nothing afterwards, that’s far worse,” Gault said. Not every brand should have an opinion or voice that opinion. The larger the brand – the bigger the expectation that they take a stand. However, all brands can still help and donate to the cause.”