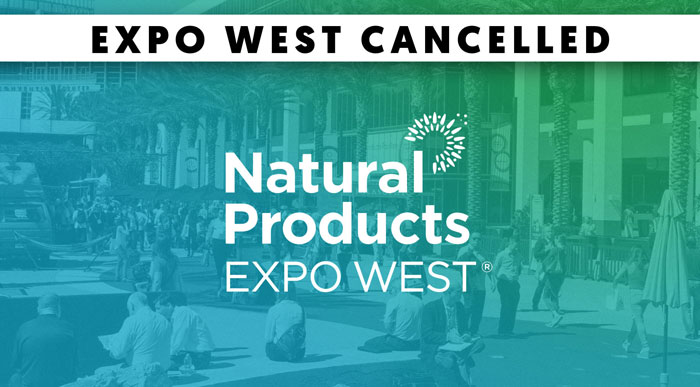 In an email to attendees late this afternoon, Natural Products Expo West producer New Hope announced it would cancel the natural products trade show in favor of focusing on its next large show, Expo East.

“2020 will be the first time in 40 years that we will not host an annual natural & organic products show in Anaheim,” New Hope wrote. “We’re disappointed, and we know many of you will be as well.”

Expo West, an event with nearly 90,000 attendees expected and more than 3,000 exhibitors, had originally been scheduled for March 3-7. The event was postponed at the time as vendors and the presenting organization faced concerns about the COVID-19 virus.

The news comes as President Donald Trump has declared a state of emergency for the nation, and the Anaheim Convention Center was closed through the end of the month in order to comply with state officials’ request to restrict gatherings to under 250 attendees and to cancel all large events.

The conference producer initially announced it would postpone the annual trade show, but with the hopes it could put on an event in Anaheim, California later by early summer, with city officials supporting the move. An email update earlier this week hinted at the possibility of an “Expo West Popup.” Anaheim’s other massive tourist draw, Disneyland, closed temporarily earlier this week, sending an ominous signal regarding other events.

Instead, New Hope added, it will focus on Expo East, which will be held in Philadelphia for the first year on September 23-24th.

New Hope had previously announced the creation of a $5 million fund to “support emerging brands significantly affected by the Expo West 2020 disruption,” and, in the email, also revealed the advisory board that would be establishing a criteria for administering the fund and providing input and ideas for Expo East.

The group, led by John Grubb, a former managing partner of Sterling-Rice Group (SRG) and the current board president of Naturally Boulder, will first convene on March 16 and is expected to deliver recommendations by April 6. Other members of the 17-person committee include: John Foraker, Co-founder and CEO of Once Upon a Farm; Jane Miller, CEO of Lilly’s Sweets; Blair Kellison, CEO of Traditional Medicinals; Wayne Wu, General Partner of VMG; Brandon Barnholt, President & CEO of KeHE; and Bob Burke, Principal at Natural Products Consulting.

New Hope also launched an FAQ page to answer the most pressing questions it has received from the industry. Notably, companies who planned to sponsor or exhibit at the trade show will receive a full credit that can be used towards other New Hope events and media solutions. Though, the conference producer did say it “hopes” these credits will be used at Expo East, sponsors and exhibitors can also apply this amount towards Expo West 2021. Due to the cancellation of Expo West 2020, New Hope said, the official re-sign process for Expo West 2021 has been paused.

All credits must be used by the end of February 2021.

While New Hope also stated that it will refund all badges, trainings, tours and educational sessions that attendees purchased, refund or credit arrangements with other parties, such as hotels booked through New Hope’s travel partner onPeak, are still in flux. More information with hotel-specific status updates will be provided starting in mid-April.

Other “official event vendor partners” are also still determining refund and credit opportunities as well. For example, while Aramark, GES and CompuSystems will provide updates “soon,” PSAV will provide no refunds and Lowe Refrigeration is offering a credit or refund.

New Hope also emphasized the importance of its Natural Products Expo Connect platform for brands to share brand news, new products and other marketing materials. For example, the directory currently features 10,000 products that would have been shown at the conference. This platform, New Hope said, can also be used as a means of getting in front of buyers.

“We encourage Expo West 2020 exhibitors promote their products, tell their story, and showcase their latest announcements,” the FAQ page states. “We will reach out with other opportunities to promote your company and products as they become available.”