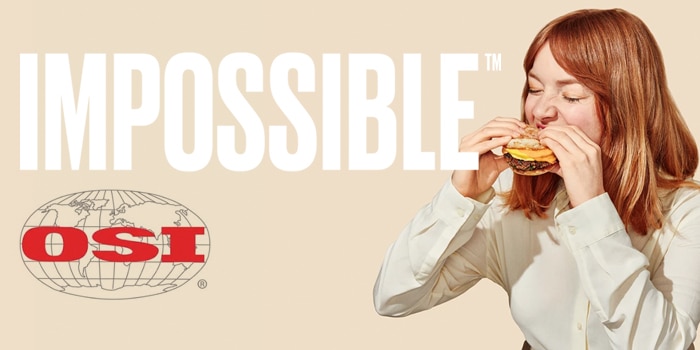 Meatless burger brand Impossible Foods is two steps closer to entering supermarket retail following FDA approval of a key ingredient and a partnership with a new co-packer. The brand told NOSH it plans to enter retail in September.

This morning the U.S. Food and Drug Administration (FDA) announced it has approved soy leghemoglobin as a color additive in “alternative, non-animal protein sources, like vegetable burgers,” the agency said in a release. Soy leghemoglobin, which Impossible derives from soybean root and has dubbed “heme,” is a key part of the brand’s offering, giving its burgers the bleeds-like-meat look that the company has touted.

While the ingredient could be used by a variety of food brands, it will have particular impact on Impossible, which needed the approval to move forward with new retail plans. According to Impossible, federal regulations require the FDA to approve all color additives in food and beverages.The FDA previously approved the company’s use of soy leghemoglobin as a color additive in “ground beef analogue” products that were sold in cooked form — such as at restaurants. The burger is currently sold in roughly 10,000 restaurants in the United States, Hong Kong, Singapore and Macau. In 2018 Impossibleasked for the FDA’s approval to sell uncooked burger patties with soy leghemoglobin.

But Impossible’s use of soy leghemoglobin isn’t without controversy. Although the ingredient is derived from plants, Impossible uses genetic engineering to produce it at scale. Competitor Beyond Meat proudly notes its own products are not made with genetically modified organisms (GMO’s). PETA also has urged its members to boycott Impossible for using rats in laboratory studies of soy leghemoglobin, a step Impossible said was unavoidable in its quest to achieve the FDA certification.

The approval comes as the FDA expects to see an increase in alternative-meat options — and the ingredients needed to produce them.

“We are in the midst of a revolution in food technology that in the next 10 years will likely lead to more innovations in food and ingredient production than there have been in the past half century,” Dennis Keefe director of the Office of Food Additive Safety in the FDA’s Center for Food Safety and Applied Nutrition, said in a release.

Impossible also announced today a new co-manufacturing relationship with food producer OSI Grou. The privately held company has 65 facilities around the globe. Impossible, which has struggled to keep up with demand for its products, will begin adding “short-term capacity” at OSI facilities in order to supplement production at Impossible Foods’ own plant in Oakland, Calif. The company revealed no plans to eventually move all production back in-house, noting that “OSI will continue to expand production of Impossible Foods’ flagship product throughout 2019 and thereafter.”