The Food and Drug Administration (FDA) issued new draft guidance last week for allulose, stating it intends to allow manufacturers to exclude the low-calorie sweetener from total and added sugars on Nutrition Facts labels, marking the first time a sweetener will be exempt from the total or added sugars list.

The draft also advises calculating allulose’s calorie content as 0.4 calories per gram of allulose. The FDA is taking comments until June 17 before it releases final guidance for manufacturers to follow.

The change creates a clearer understanding of the ingredient’s nutrition and should especially help consumers seeking ways to reduce sugar and calorie intake. For businesses, allulose provides a healthier alternative to other sweeteners, without sacrificing taste, and the proposed labeling change more clearly emphasizes its nutritive value. Ingredient manufacturers believe it may open the door to more brands trying to incorporate the sweetener.

“Allulose is not used by the body as an energy source, so we felt to label it in the same way as other sugars would not be really providing consumers the type of information they’re looking for,” Doug Balantine, director of the FDA’s Office of Nutrition and Food Labeling, told NOSH.

Allulose is classified chemically as a ‘rare sugar’ because it appears in nature in small and rare quantities. So even though small amounts are present in figs, jackfruit, raisins and wheat, commercial production generally involves allulose found in corn, Afrouz Naeini, Ingredion’s regional platform leader for sugar reduction in the U.S. and Canada, told NOSH. Less than 10 U.S. brands use allulose in the beverage, bakery & confectionery and tabletop sweetener categories, she added.

Tate & Lyle, the producer of Splenda, submitted a petition to the FDA in 2015, with support from allulose producer Matsutani Chemical Industry Company and groups like the Calorie Control Council. Tate & Lyle has also produced allulose, in both liquid and crystalline forms, since 2015, while fellow ingredient supplier Ingredion works with Matsutani, which received Generally Recognized As Safe (GRAS) status for allulose production in 2014 and submitted clinical trials to the FDA to support the new guidance. Other allulose products include allSweet from Anderson Advanced Ingredients and KetoseSweet allulose from Icon Foods. 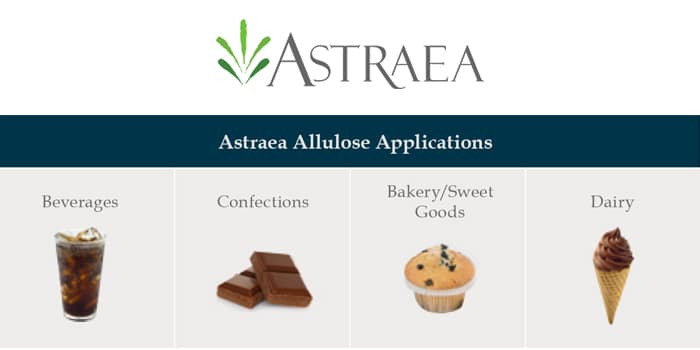 Allulose has 10% the amount of calories as sucrose (table sugar), is 70% as sweet and doesn’t raise insulin levels or promote tooth decay, according to the FDA. Until now, inclusion as an added sugar on labels has been confusing, particularly to consumers with diabetes, and has deterred companies from using it, Storms said. It will, however, remain listed under carbohydrates.

KNOW Foods has used allulose in its products since launching its bread line in 2016, Lauren Ramsey, the brand’s vice president, said, noting its benefits, along with taste, were that it has only 10% the calories of sugar and doesn’t affect insulin levels. Plus, the sweetener’s cost was about the same as other sweeteners, she added. Along with bread, the brand now sells a variety of products across categories: cookies, waffles, cupcakes, muffins, mixes and chocolate, all of which have allulose as an ingredient.

However, listing allulose as an ‘added sugar’ on packaging made the sugar content and carbohydrate count appear high, which was confusing to consumers, she said. To see the true carbohydrate number, the brand advised customers to read the ‘Net Carbs’ — the carbohydrate number minus the added sugar and fiber, which meant extra work for the consumer to understand the product.

“That has been a deterrent for people, especially those watching their sugar intake,” Ramsey said. 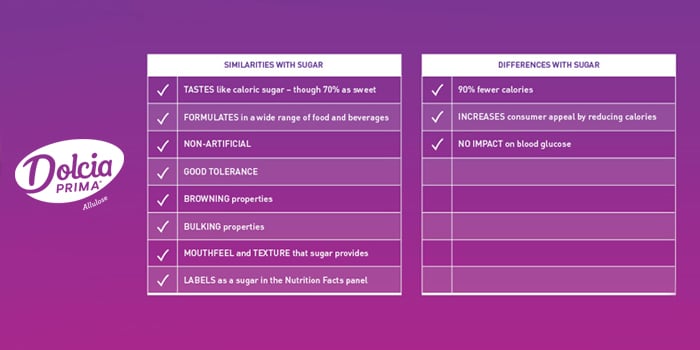 There’s a high level of excitement and eagerness from brands hoping that better labeling leads to better consumer understanding, Storms told NOSH, noting the ingredient’s price is generally slightly lower than erythritol, a sugar alcohol that also has 70% of sucrose’s sweetness and only 6% of its calories but sometimes yields reports of gastric distress from consumers.

The addition of ‘added sugar’ to nutrition panels was first announced by the FDA in 2016 and will be required on packaging by 2020. ‘Added sugar’ refers to sugar that manufacturers add to food during processing, including free, mono- and disaccharides, sugars from syrups and honey, and sugars from concentrated fruit or vegetable juices that exceed what would likely be found in the same type and volume of 100% juice. The FDA is currently still evaluating how to declare sugar content on nutrition labels for maple syrup, honey and certain cranberry products, Balantine said.

According to an online survey Ingredion conducted last month, 90% of consumers had not heard of allulose, but after learning about it 72% said they were interested in finding products that contain it.

“It’s a great tool in the toolkit for sugar reduction, knowing all the advantages and benefits it brings,” Naeini said.