The trend of transparency within the packaged food industry is getting literal.

Sonoco, a global packaging company, has created a line of see-through cans called TruVu. Although the cans were announced in 2015, TruVu hit the market with its first brand last month. 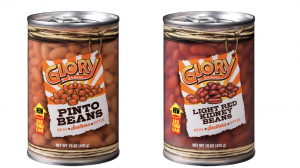 McCall Farms, a South Carolina-based canning company, is using the TruVue plastic can to package a new line of bean products under its Glory Farms brand, according to Brian Risinger, director of corporate communications and investor relations at Sonoco. McCall’s seven SKUs of different bean varieties rolled out in 400 stores, primarily in the Southeast, in two retailers: Harris Teeter and Ingles.

With a metal top and bottom and a multi-layer plastic body, the cans are able to run on current manufacturing machinery with little to no investment needed. Transparency, Risinger said, allows companies like McCall to reinvent their brands without reinventing the manufacturing process or impacting a product’s coloring.

“Metal cans have been made for decades and most [canning equipment] is fully depreciated, so an option that requires a very minimal capital investment, but gives [brands] an opportunity to expand their package portfolio is a unique opportunity,” Risinger said.

Risinger said the can is currently in trials with several other companies, but could not discuss details for future placement on shelves in 2017. He added that the company thinks the innovation is important in allowing brands to differentiate themselves and expand their portfolios.

“It [doesn’t cost] significantly more than a metal can,” Risinger said, “but we are also making an assumption that a brand that decides to add this to their portfolio is most likely going to use it for a more premium product, and they would have the opportunity from a marketing standpoint to charge more for the product that goes into the package.”

TruVu isn’t completely comparable to traditional metal cans. Products in TruVue cans only last 18 months to two years, whereas a metal can could conceivably give the same product a shelf life of three years or more. As for sustainability, there are both benefits and hindrances. The cans weigh less than comparable steel cans — 12.5 percent less than a two-piece and 18.5 percent less than a three-piece format – leading to lower transportation costs. But at the same time, TruVu cans use multiple types of recyclable materials, and most recyclers don’t currently have a process to separate them.

The clear can is hitting the market at a time when consumers are gravitating toward transparency in food, which is what primarily drove this packaging innovation.

“The can signals the purchasing cues of better taste, freshness, authenticity and higher quality today’s shoppers are looking for in their mainstay canned food products,” Risinger said. “They want to see what they are buying and it adds a bit of the feel from the perimeter of the store to the center of the store.”

Though TruVu may be leading the charge for clear cans in the food world, the trend has already been making waves in the beverage industry. Tickle Water, a premium flavored sparkling water beverage for kids, is packaged in tot-sized, clear cans by Invento. Tickle Water Founder Heather McDowell told NOSH she chose this can because she thinks it signals to consumers that the product has nothing to hide, including unwanted ingredients, sugars, preservatives and sodium.

“I think people are more aware of what they are putting in their bodies and they’re more health conscious than they used to be,” she said. “People really do care about what is inside a product, whether it’s a food or beverage, and… seeing is believing.”

She added that she thinks the internet and social media is making consumers more visual, so innovative design, like clear cans, is more important than ever to stand out on shelves.

“The two go hand in hand,” she said. “Transparency is an element of design, and it is really a sophisticated way of elevating your design.”