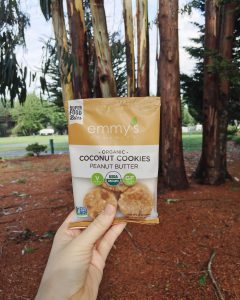 “Our superfood snacks are delicious to eat and easy to share, and consumers will be surprised when they learn how much nutrition is in every bite,” says Emmy’s Co-founder and Co-owner Samantha Abrams.

Based in Ithaca, NY, Emmy’s Organics Co-founders Samantha Abrams and Ian Gaffney were recently featured in The Ithaca Voice for their entrepreneurial accomplishments and “meteoric growth.” From first making their coconut cookies in Gaffney’s mother’s kitchen to selling them at the Ithaca Farmers Market, consumers now can enjoy Emmy’s Organics products across the U.S. and in select locations in Canada, the United Kingdom and Mexico.

Additionally, Emmy’s Organics is excited to announce a new retail partner, New Seasons Market, a 20-store grocery chain based in Portland, OR, offering a mix of grocery classics and local, natural and organic foods and dietary supplements.

Emmy’s Organics is a family-oriented, power snack food company based in Ithaca, NY. Launched in 2009 by Co-Founders Samantha Abrams and Ian Gaffney, Emmy’s Organics produces a line of certified organic, vegan, gluten-free and non-GMO cookies and cereals from premium raw ingredients in a wind- and solar-powered building.

For wholesale inquiries – wholesale@emmysorganics.com. You can shop online: at emmyorganics.com. Connect on Facebookand Instagram.