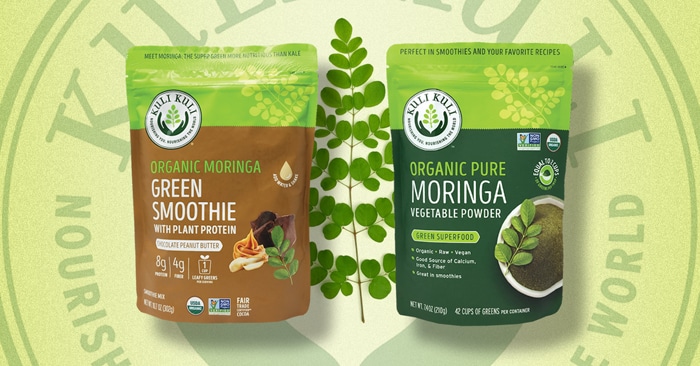 When moringa-based food and beverage brand Kuli Kuli launched onto the market in 2014, its founder and CEO Lisa Curtis claims “virtually no one” had heard of the superfood plant. Today, Kuli Kuli launched in 2,500 Walmart locations, a significant gain in its ongoing efforts to make this lesser known ingredient appeal to the mainstream consumer.

The brand will roll out two products in Walmart: its flagship Pure Moringa Vegetable Powder and its Moringa Green Smoothie Mix in Chocolate Peanut Butter flavor. This smoothie SKU, which launched last year, has proven to be one of the brand’s most popular, according to Curtis, and has served as a more accessible option to those unfamiliar with the superfood.

The path to Walmart was slightly serendipitous. Earlier this year the brand announced it had raised $5 million in funding, which ultimately grew to a $6.34 million round before close. Originally slated to close in December, the funding round was stretched longer when the brand realized that one of its investors “just wasn’t the right fit,” according to Curtis.

“They weren’t mission-aligned, they weren’t value-added, so we kicked them out of the round and decided to continue fundraising, which felt like a really hard thing to do,” she said. “It’s hard to turn down capital, but we did it anyway.”

Ultimately that capital was replaced by the addition of Authentic Ventures, a venture capital firm that invests in female and minority founders. After joining, the firm helped Kuli Kuli get its foot in the door at Walmart through a connection with its chief marketing officer. Had Curtis gone with her original investor, the Walmart placement might not have happened so soon, she said.

“It’s really important to make sure you’re aligned with the people you take capital from and they’re not just writing a check, but in it for the long term,” she said. 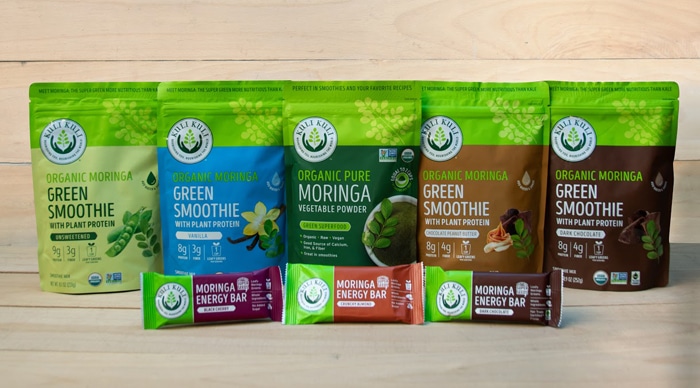 Kuli Kuli, which in addition to its moringa powder and smoothie mixes offers lines of bars and wellness shots, has been focused on a three-pronged strategy for increasing consumer awareness, Curtis said.

She noted that the brand has utilized a strong field marketing team to increase name recognition of the plant. On social media and the brand’s blog, the company has emphasized the health benefits attributed to moringa (such as anti-inflammatory and antioxidant properties), as well as the brand’s practice of sourcing moringa leaves from small farmers on the continent of Africa.

Kuli Kuli has also worked to make the ingredient more accessible through new flavor offerings. Conventional consumers aren’t used to the ingredient’s “earthy” flavor, Curtis said, and don’t always know how to include it in recipes. Through taste-testing, the brand discovered that indulgent flavors could serve as a gateway to moringa for conventional shoppers. This led to the creation of its smoothie mixes and eventually its Chocolate Peanut Butter SKU.

Kuli Kuli was exclusively focused on the natural channel for the first few years on the market, said Curtis, available at retailers such as Whole Foods and Sprouts. It first tested out how moringa would perform in the conventional channel with the launch of its flagship powder into 1,500 Safeway stores and 2,500 CVS stores in 2016, in sets with other superfoods such as hemp and chia seeds. Curtis said Kuli Kuli later became the “best selling superfood in CVS,” claiming SPINS data showed it sold 2.5 times as many units as the other top 10 green supplement products in conventional retail.

But there’s still room to grow. Data from Nielson indicates that moringa has achieved a 3% penetration in US households, with Kuli Kuli controlling over half of the U.S. retail moringa market. Curtis also sees potential with Hispanic and Phillipino shoppers, who may not frequent natural retailers but are familiar with the plant for its medicinal properties in their respective cultures.

In additional to recent gains for its CPG portfolio, Kuli Kuli is also growing its business as a moringa supplier, part of the impetice for its Series B funding. Earlier this year, wellness beverage brand REBBL released a Yerba Mate Mint Latte using Kuli Kuli moringa, and the brand also partnered with Los Angeles’ Venice Bakery to include its moringa in a plant-based pizza crust. Curtis said additional partnerships with food brands, both for humans and pets, are in the works. 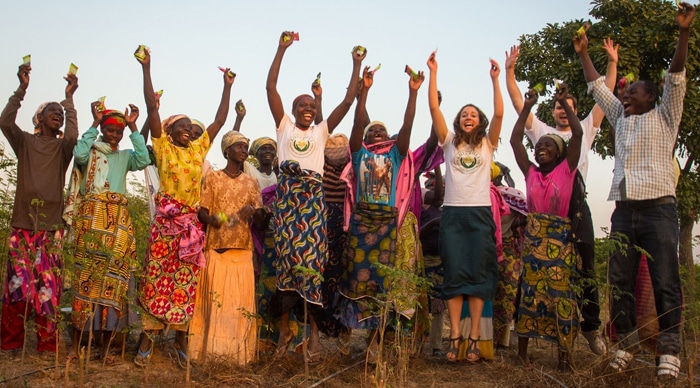 With this increased business, Curtis said Kuli Kuli has scaled up production, working closely with its farmers and bringing in technical agronomists and quality control specialists to assist its network of over 2,000 small farmers in Africa meet production demands and grow their businesses.

Curtis said a goal for Kuli Kuli is to fight hunger both in Africa and at home, and will be donating a moringa product to a Feeding America food bank for every product sold at Walmart through November 19.

“We want to make sure the product has an impact on improving nutrition here and abroad,” she said.