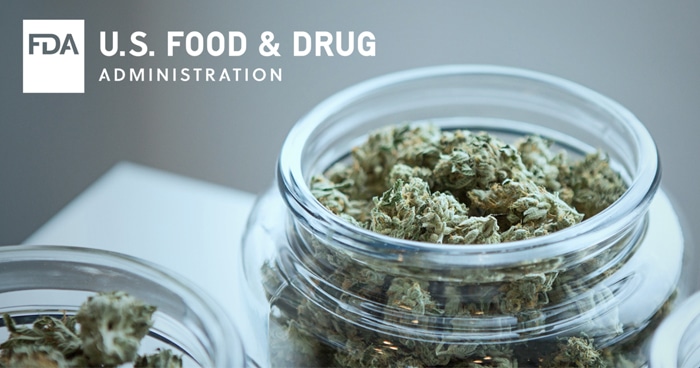 For a natural remedy meant to ease anxiety, the cannabidiol (CBD) market has become a place of confusion — not calm. On Friday, the U.S. Food and Drug Administration (FDA) held its first hearing on cannabis products, including CBD food and drink products. Over 100 speakers, health professionals, manufacturers, consumers and others, urged the FDA to act quickly to create federal guidelines for the growing — and largely unregulated — industry.

“While we don’t generally require foods to be approved by FDA before coming to market, we do require that a new food additive be approved as safe by FDA before being put in the food supply, unless the substance is generally recognized as safe, or GRAS,” Ned Sharpless, FDA’s acting commissioner, said at the hearing.

The FDA panel listened, asked some presenters questions and asked those who presented research to add it to the public docket, which is open for comments until July 2.

CBD was the main topic, but the hearing covered the cannabis space overall. From controlled studies on CBD’s benefits to safety concerns and pleas for strict control, one thing was clear: the FDA has many issues to address in the cannabis space, and the public wants CBD regulation to happen quickly.

A study by media corporation Consumer Reports of over 4,300 adults found that 25% have tried CBD at least once in the past two years; 35% of them tried it in food and drink, and 34% bought it at retail outlets, Lisa Gill, deputy editor at Consumer Reports, said at the hearing. While only 13% of CBD consumers were concerned about product safety, according to the survey, CBD retailers, manufacturers and many consumers are demanding that the FDA provide guidelines on labeling and dosage — two of the current market’s biggest pain points.

Sharpless noted at the hearing that both CBD and tetrahydrocannabinol (THC), compounds found in hemp and marijuana plants, have been approved as drugs. The Federal Food, Drug & Cosmetic Act prohibits drugs from being added to human or animal food in interstate commerce.

Epidiolex, a drug for epilepsy control, is the only FDA-approved drug containing CBD.

“Although the law says that FDA can issue regulations to create new exceptions to these statutory provisions, FDA has never issued a regulation like that for any substance,” Sharpless added. “So, if we were thinking about doing that for a substance like CBD, it would be new terrain for the FDA.”

Epidiolex’s label does contain warnings about liver toxicity, suicidal behavior/ideation and hypersensitivity reactions, but that doesn’t necessarily mean CBD itself poses those risks. Many hope FDA regulates CBD separately as a supplement for use in food and drink.

“Hemp extract, hemp CBD and derivatives are simply not related to the product it’s being compared to, which is pharmaceutical,” Karen Howard, CEO and executive director of the Organic and Natural Health Association said at the hearing.

Instead, the regulatory framework already in place for dietary supplements in food could be applied to CBD if the FDA allows it, Megan Olsen, assistant general counsel at the Council for Responsible Nutrition, said to panelists. But the FDA provided no details or timeline on how long it would take to formally regulate CBD products and legalize CBD in food and drink.

“Despite the FDA’s current position, the CBD food and supplement marketplace is exploding,” Olsen said. “FDA does not have the luxury of time. They must act quickly to address the market that is out of control.”

“While we have seen an explosion of interest in products containing CBD, there is still much that we don’t know,” Sharpless said.

The FDA’s questions, which create “unique complexities” for regulation, he said, include: dosing, usage, safety for use by pregnant women, drug interactions and prolonged use.

Some of these issues were also presented by attendees, while some attendees provided research to help solve them. CBD is available in places from c-stores to wellness centers, with a variety of cannabinoid content claims and labels, along with different state-to-state laws, despite hemp itself being federally legal.

Some attendees encouraged FDA to enforce third party testing: any CBD product must be tested by a third party for toxin presence and to confirm ingredient accuracy. Though 0.3% is the legal threshold of THC content allowed in a CBD product, many products contain more, which could pose a safety risk. The FDA must clarify and specify this guideline to create product consistency, some speakers said.

Yaël Ossowski, deputy director for the Consumer Choice Center, called for “smart cannabis safety,” noting that in the current market it’s “hard to tell the difference between different brands.”

“It’s important for consumers to know the side effects and what the benefits are going to be,” Ossowski said.

Additionally, he said, FDA must decide whether an age restriction, similar to medical marijuana or alcohol, is necessary, along with addressing expected effects of CBD on children — a child could easily eat a CBD gummy or chocolate.

The FDA has sent several warning letters to companies it said were making “unfounded, egregious” health claims on their products; in early April three companies, including Diamond CBD, which produces CBD oil and edibles, received warning letters. But warnings may not be enough to control an overflowing market.

“This successful experiment is now becoming a permanent reality,” Jonathan Miller, general counsel of business advocacy organization the U.S. Hemp Authority, told the FDA. “We believe the FDA has all the tools necessary to expeditiously issue a rule allowing CBD in food and dietary supplements.”

A transcript and webcast of the hearing will be posted within 30 days.