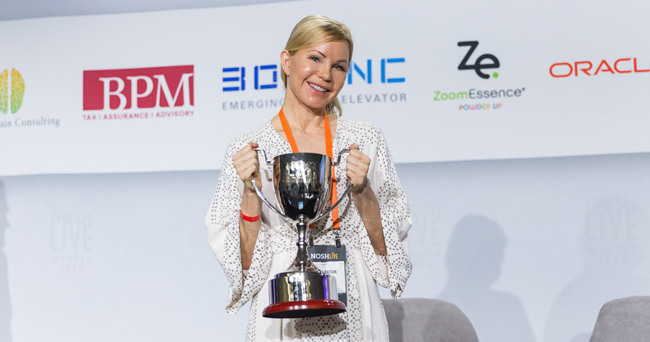 Creation Nation, a maker of no-bake protein bar and bite mixes, emerged as the winner of the NOSH Live Pitch Slam 5 product competition held during the two-day NOSH Live Winter 2018 conference on November 29 and 30 in Santa Monica, Calif.

Following the competition, Creation Nation founder and CEO Karen Nation said she was still caught up in “all the excitement and the whirlwind” of winning.

Creation Nation sells three flavors of no-bake protein bars — PB & Jelly Get in My Belly, Whey Hip Chocolate Chips and Peas Love & Cocoa — as well as two energy bite mixes — Cocoa for Coconuts and Oat Yes! Chocolate Chip — that can be made at home in minutes.

“We saw an unmet consumer need for that product and how they’re filling a gap on both what’s currently available on shelves and how they could pretty rapidly scale that business,” Freeman told NOSH after the competition.

Freeman added that the judges envision a long runway for Creation Nation as it moves into other functional baking foods.

“They could roll into muffins or actually already made products,” he said.

During her pitch, Nation said the brand was born from her own desire to make healthy homemade protein bars. She added that Creation Nation seizes on an opportunity for consumers to customize their protein bars and energy balls to their own tastes.

Prior to announcing the winner on stage, Bastian said the judges considered each product’s concept, innovation and competitive landscape in choosing a winner.

“There was nothing else like it in the marketplace,” Bastian said of Creation Nation. “You’re new but you have so much traction.”

Speranza added that Creation Nation’s “creativity and conceptualization were second to none.”

However, Bastian did offer a piece of constructive criticism, noting that Creation Nation’s packaging “needs some help” due to “architectural” issues. But the judges acknowledged that packaging evolution is a “constant process.”

Following the competition, Nation told NOSH that she plans to continue to grow the brand’s distribution footprint and customer base, while also introducing new flavors and line extensions.

“We want to help people have a better tasting, better quality, healthier experience with their snacking,” she said.