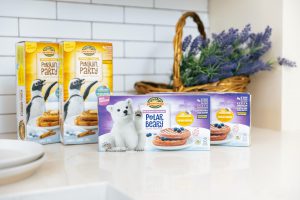 “EnviroKidz new Penguin Party and Polar Beary waffles are chock full of healthy whole grains and protein,” says Arjan Stephens, General Manager of Nature’s Path. “Believe it or not, the protein comes from navy beans and peas. Which means your kids are getting lots of delicious, certified organic veggies in every bite. But I guarantee they’ll never guess (my kids didn’t), because they taste so good!”

Polar Beary also gets its delightful pink color from beets and fresh blueberries. And despite their sweet taste, there are just 5 grams of sugar per serving in both varieties of waffles.

As with all EnviroKidz products, a portion of every purchase goes towards protecting endangered species. To date, EnviroKidz has donated more than $3.5 million to organizations that work towards saving threatened and endangered animals, including the Jane Goodall Institute and the Dian Fossey Gorilla Fund.

EnviroKidz Polar Beary waffles will highlight the plight of the polar bear. Polar bears are endangered due to climate change, increased commercial activities, pollution, disease and habitat erosion. EnviroKidz has now deepened its existing partnership with Defenders of Wildlife, which is dedicated to the conservation of the polar bear. Their efforts include advocating against proposed oil and gas development on the Arctic National Wildlife Refuge, among many other initiatives.

The African penguin is also under threat due to climate change and industrial fishing. The EnviroKidz Penguin Party waffles will highlight the plight of penguins and the work of Penguins International. In the last 50 years, the population of the African penguin (featured on our EnviroKidz Penguin Party box) has dropped by 80% and there are only about 23,000 breeding pairs left in the wild. Penguins International is working hard to protect their future.

“As part of our mission to always leave the earth better than we found it, it is so important for us as a company to help protect endangered and threatened species,” says Jyoti Stephens, VP Mission and Strategy at Nature’s Path. “We treasure both Polar bears and African penguins and hope our donations will help ensure they flourish for many generations to come.”

Nature’s Path Organic Foods is North America’s largest organic breakfast and snack food company and produces USDA and Canadian Certified Organic and Non-GMO Project Verified breakfast and snack foods sold in grocery and natural food stores in over 50 countries around the world. Committed to the triple bottom line— socially responsible, environmentally sustainable and financially viable, Nature’s Path works diligently to support communities and champion the cause of people and planet. Brands include Nature’s Path, Love Crunch, Qi’a, Que Pasa, Flax Plus, and EnviroKidz. Founded in 1985, Nature’s Path is headquartered in Richmond, British Columbia and employs hundreds of valued team members at its four facilities in Canada and the United States.

ABOUT DEFENDERS OF WILDLIFE

Penguins International is a non-profit organization committed to preserving and protecting penguins around the world. Founded in 2017, Penguins International is on a mission to actively engage in penguin conservation projects, to advance knowledge and understanding of penguins through scientific research and to promote awareness of threats to penguins, and to provide conservation education to the public.

Penguins International does not focus on one specific type of penguin, but on the protection and conservation of all species of penguins worldwide. Currently, 9 out of 18 species of penguins are threatened with extinction. Penguins International programs include penguin pollution exposure research, educational penguin workshops, development of artificial nest boxes, habitat restoration, and supporting penguin conservation partners.