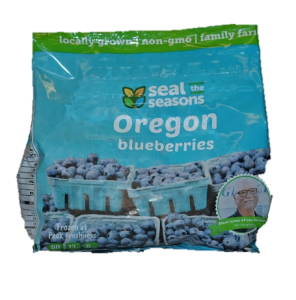 Consumers want LOCAL fruit year-round, but typically they can only access it a couple weeks out of the year when a crop is in season. Seal the Seasons partners with family farmers in Oregon and Washington to freeze their produce and make LOCAL fruit available 365 days a year in the frozen section.

“We couldn’t be more excited!” said Safeway-Albertsons Frozen Food Sales Manager, Kris Brouhard. “This is truly an innovative and ideal partnership for us. We love supporting local farmers by providing their great tasting produce to our customers and now we can do it all year long!”

Seal the Seasons is the first frozen fruit brand to sell on a National/Local model working with farmers on a state-by-state or region-by-region basis to freeze their product and sell it in the area where it is grown.

Typically, frozen fruit comes from all over the world. For example, frozen strawberries often come from Turkey, Egypt, Serbia, Peru and Mexico, while frozen blueberries come from Chile, the Philippines, Ecuador and Canada. Seal the Seasons buys fruit from American farms that are as close to retailers as possible. Albertsons and Safeway stores in Oregon will carry Seal the Seasons frozen fruit grown in Oregon and Washington.

Seal the Seasons mission is twofold: (1) to provide consumers with locally-grown frozen fruit year-round and (2) to give family farmers a reliable source of income by creating a year-round market compared to the fresh market which might only be a few weeks.

“Throughout college I worked at my local farmers market. The growers often had extra produce, but no way to preserve it and make it available year-round for the community,” said founder and CEO Patrick Mateer. “Seal the Seasons is a win for family farms to sell more produce and a win for our communities to buy the best quality local food.”

Small family farms have been closing at an unprecedented rate since the turn of the millennium. Since 2000, approximately 21 percent of small family farms have been forced to close their doors. Seal the Seasons is committed to helping keep these farms open by providing a reliable source of revenue by taking their fruit to the market at conventional grocery stores 365 days a year.

Seal the Seasons believes that we have wonderful fruit grown right here in the United States and should support our local and regional farmers.

As a Certified B Corporation, Seal the Seasons is committed to using business as a force for good in the world. Its mission is to build local supply chains to change the food system. For more information about Seal the Seasons, visit www.sealtheseasons.com.