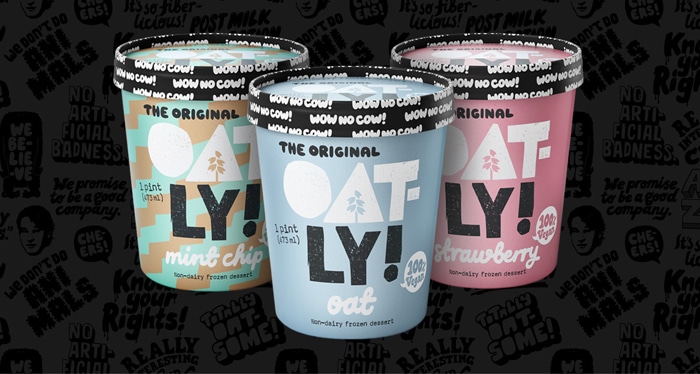 In Europe, where Oatly originated, the brand offers an array of products including oatgurts, oat beverages, oat spreads, oat and fruit smoothies, oat lattes, oat creams and even an “Oat Fraiche.” In the U.S., the brand has simply been focusing on getting up to full capacity on its milk alternatives. But now Oatly is ready to offer shoppers more than just milk, general manager Mike Messersmith told NOSH.

“We’ve wanted to, when we had the operational foundation solid, be able to start that expansion and not be too aggressive but also not be too hesitant based on the history,” Messersmith said. “We don’t want to wait too long to start expanding.”

Retailing at $5.99 a pint, the ice cream will launch in select retailers including Fresh Direct, Wegmans, Whole Foods and an assortment of Target stores over the next two months. Oatly’s ice cream will launch with seven flavors: Vanilla, Chocolate, Strawberry, Coffee, Chocolate Chip, Mint Chip and Oat. The pints have already has hit smaller retailers in Los Angeles and New York City, a move that Messersmith hopes will allow consumers to discover the brand organically and feel like they’re in an exclusive group of early adopters.

To kick off the launch, Oatly developed a coffee and ice cream truck to travel around Southern California for the summer. In addition to festivals and events, the truck often can be found parked outside of coffee shops (such as Intelligentsia, Alfred and Blue Bottle) that supported the brand even through supply shortages. Consumers who buy an oat milk beverage inside are given a token for a free ice cream. Otherwise, two scoops are sold for $4 — the truck doesn’t sample product for free.

“I’ve worked at companies where sampling is a core part of the business and it can work. But I’ve also seen the flip side,” Messersmith said. “When we think about people having that first experience, people are more likely to ascribe value to the product and the whole experience if they pay a small amount to it.”

Although the brand had a on-premise first approach to launching the oat milk, which is now in roughly 2,500 retailers and 5000 specialty coffee outlets, the ice cream is going straight to retail.

The company’s launch partners were selected to reward those retailers that “believed” in the brand — and the category — when it first launched and then “stuck with the company,” Messersmith said. Until Oatly entered the scene, oat milk was largely ignored in favor of other milk alternatives such as almond and soy.

Seven flavors may seem like a large number of SKUs to launch with, but Messersmith told NOSH that retailers requested a full shelf of Oatly products. In a crowded freezer case full of flavors such as coffee and donuts, wild Maine blueberry crisp and bananas foster, classic flavors such as vanilla and strawberry can come off as outdated, but Messersmith told NOSH this was where Oatly actually sees the biggest opportunity.

“We saw a really big gap in the plant-based or vegan frozen set in the ability to execute classics or staples in a really high quality way,” Messersmith said. “There are a lot of plant-based items that have elaborate ingredient structures with peanut butter and flavors and crazy mix-ins, which is a big subset of the ice cream category, but our approach was ‘let’s try to do the classics but no dairy, no nuts no soy, non-gmo way.’”

The ice cream packaging will sport a similar color scheme and aesthetic as the flagship oat milk line, but the U.S offerings do eschew the tongue in cheek names (such as Totally Basic Chocolate and Quite Ordinary Strawberry) of their European compatriots. Instead, Messersmith said, U.S. consumers will find Oatly’s whimsical copy printed on the pint’s heat seal.

Like with its oat milk, for the ice cream Oatly will process raw oat milk kernels into a liquid oat ingredient, which is then shipped to a co-packer in Quebec to become the finished product.

At its own 25,000 square foot plant in New Jersey, Oatly is already shipping 50% more oat milk base then it was last year, and, Messersmith said, that number will continue to go up. He added, that the company is almost at the point of maxing out its current copackers’ capabilities to create finished product.

The brand is adding a new 120,000 square foot plant in Ogden, Utah that will come online in Spring 2020 and be the brand’s largest facility globally. The new plant will allow the company to double its current manufacturing capacity as well as reduce delivery times and shipping costs.

Messersmith said the brand won’t be too quick to jump into other dairy-alternative products. For now, Oatly will focus on the ice cream and milk. But, if this launch goes well, there’s certainly runway to explore more “staple” dairy products.

“Other plant-based dairy is not necessarily my overt competition. We’re trying to shift the category towards more plant-based consumption,” Messersmith said. “We try to ask ourselves, ‘if we were a cow’s milk company, what are all the different products we could use our milk to make?’ Because ultimately, that’s where we think the opportunity is and where we can add value.”