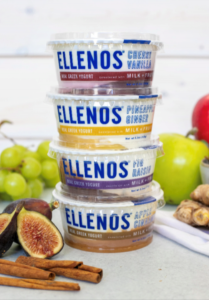 SEATTLE-– Ellenos, the Pacific Northwest-based beloved Greek yogurt brand, is delighted to bring a new spin on their fan favorite product to the yogurt aisle with the launch of Ellenos® Milk + Fruit, available exclusively at Whole Foods Market locations across the Pacific Northwest until the end of the year. Ellenos Milk + Fruit focuses on bringing the simple sweetness from just real milk and fruit for a no sugar added creation meant to be enjoyed on the daily.

Ellenos Greek Yogurt is made with fresh milk sourced directly from a single local farmer, and the brand’s fruit purees are made in-house from whole food ingredients. Featuring 50% less sugar, Ellenos Milk + Fruit is available in 5.3 ounce cups in flavors such as Pineapple Ginger, Cherry Vanilla, Fig Raisin and Apple Cinnamon. Like all Ellenos products, Ellenos Milk + Fruit is made with impeccable ingredients including ripe black cherries and floral Tahitian vanilla bean extract for the Cherry Vanilla variety, granny smith apples cooked with a dash of cinnamon and a pinch of spice to create Apple Cinnamon, and more. The concept is simple: no added sugar, no fake sweeteners, just incredible yogurt and handmade fruit purees – that’s it!

Founded in 2013, Ellenos was born when husband and wife, Bob and Yvonne Klein, convinced father and son duo, Con and Alex Apostolopoulos, to bring their long-standing family yogurt recipe to the U.S. from Australia. The families joined forces to launch Ellenos in Seattle beginning with a storied retail operation in the iconic Pike Place Market and expanding over the past seven years into regional, natural and conventional grocery stores where it quickly became the fastest-selling yogurt in the category. The handmade Greek recipe is strained and blended over a proprietary five-day process that has been a closely held family secret for generations. With the brand’s unparalleled taste and flavor, Ellenos is evolving the use occasion for yogurt and invigorating the stagnant category.

“It’s really just milk and fruit, seriously,” said Ellenos Co-Founder, Con Apostolopoulos. “We’ve heard consumer feedback of people looking for a no sugar added option and think we’ve created something truly better tasting than what currently exists in the market that will make them say ‘wow’ at first bite. With Ellenos Milk + Fruit we are offering a way to enjoy Ellenos every day and look forward to seeing how our customers incorporate the product into breakfast, snacks, treats and more as we continue to push the boundaries of how yogurt should taste and be enjoyed.”

With early roots in Australia, Ellenos opened first in the Pike Place Market in Seattle and has since created a cult following in the Pacific Northwest. Ellenos is focused on expanding its high-quality Greek yogurt with hand-picked ingredients and unparalleled taste to yogurt-lovers nationwide. Ellenos’ real Greek Yogurt, sourced from fresh wholesome milk directly from the local farmer, is available in delicious flavors like Lemon Curd, and Passionfruit along with other exciting flavors like Mango, Pumpkin Pie and Marionberry. Ellenos also now offers a no sugar added line with Ellenos Milk + Fruit, available in flavors such as Pineapple Ginger, Cherry Vanilla, Fig Raisin and Apple Cinnamon. For more information, visit www.ellenos.com.