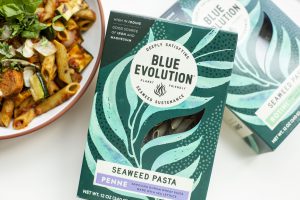 LOS ALTOS, Calif.– Blue Evolution, maker of sustainable seaweed infused pastas, celebrates the official relaunch of the brand with a new logo, packaging, and updated product messaging that highlights seaweed nutrition and the company’s influence on social and environmental change. Blue Evolution believes there’s real magic in producing foods that offer a deeper connection to the ocean and the company is the largest grower of seaweed on the Pacific Coast of North America, with farms in Kodiak, Alaska and Baja Mexico. The company’s bold purpose is to source regenerative “blue crops” from the ocean; reduce our food production dependence on freshwater, land, fertilizer, pesticides and energy; and tackle ocean acidification.

“As our name suggests, we are about continual improvement. And while we’re extremely proud of our pasta and all the doors it has opened for us, we want to up our game with regards to visual appearance and messaging” explains Beau Perry, founder and CEO of Blue Evolution. “The main advantages we really want to communicate with our new branding are the nutritional benefits that go along with the delicious flavor, texture, and appearance of the pasta itself. And while we were at it, because we think seaweed is so beautiful (visually and otherwise), we decided to explore the graphic element of seaweed as part of the process.”

The resulting packaging with its teal, tone-on-tone, under-the-sea scene, evokes the movement and magic of seaweed while calling out the elevated nutritionals front and center.

Blue Evolution’s pastas are a good source of bioavailable plant-based iodine, magnesium, and iron and are infused with the highest quality seaweed, grown at Blue Evolution’s on-shore farm adjacent to the pristine waters of the Pacific Ocean. The Company’s seaweed infused Penne and Rotini pastas have a perfect texture and a delicate taste, resulting in a delightful fusion of land and sea that is a charmingly green replacement for any pasta recipe.

New Hope Network identified Blue Evolution as the “next hot environmentally friendly brand” for a reason. To further solidify their sustainable ethos, the Company’s packaging is made from recycled materials, boxes are printed with vegetable-based inks, and the window on the box is derived from plants.

According to the Monterey Bay Aquarium’s Seafood Watch program, seaweed is a Best Choice: “Seaweed absorbs energy from the sun and nutrients in the water to grow, making the use of feeds and chemicals unnecessary. Seaweed farming is considered a highly sustainable practice because environmental impacts are minimal.”

Blue Evolution’s newly rebranded pastas are available now on the company’s website and at retailers across the country including Fred Meyer, King Sooper, Ralphs, and Sprouts Farmers Markets.

There’s real magic in food that offers a deeper connection to the ocean. Blue Evolution was founded based on a love of surfing, diving, and all things related to the sea, to craft healthy, sustainable foods that nourish the world’s growing population. As the largest grower of seaweed on the Pacific Coast of North America – with farms in Kodiak, Alaska and Baja Mexico – Blue Evolution is on a mission to bring seaweed farming closer to home. The brand’s full line-up of products feature seaweed grown at Blue Evolution’s own on-shore farm adjacent to the pristine waters of the Pacific Ocean. The company’s bold mission is to disrupt the seaweed market, lift the veil on seaweed production and sustainably cultivate seaweed in partnership with local communities. Join the revolution and swim along on Instagram, Facebook, and Twitter!