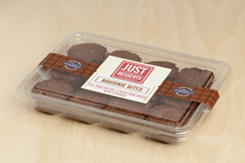 Michael J. Mendes, CEO of Just Desserts, notes that its Bites product line has seen rapid growth over the past several years. “We have been pleased with consumer and retailer reception to our Bites line, fueled by a strong combination of premium ingredients, innovative new recipes, and a convenient portion-controlled format,” said Mendes. He adds, “These hand crafted, baked from scratch Bites deliver every bit of the superior taste and texture that Just Desserts has been known for since 1974.”

Just Desserts is an artisan-inspired baking company that makes premium desserts and wholesome sweet snacks that are sold in grocery and convenience retailers from coast to coast. Just Desserts was founded in San Francisco in 1974 with a passion for making the most delicious desserts that are always hand-crafted and made from the highest quality kitchen pantry ingredients.