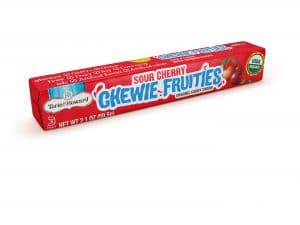 Chewie Fruities grab-and-go stick packs have a suggested retail price of $1.99 and are available 18 to a display case and 12 cases in a master case. A countertop display is available that holds 54 Chewie Fruities stick packs and ships as a single unit. The candy also is available in 4-ounce peg sacks with a suggested retail price of $3.99 that ship six to a case and 48 to a master case. More information may be found online at www.TorieAndHoward.com or by calling 1-888-826-9554.

Torie & Howard is a producer of all-natural, organic candy designed to satisfy consumers with discriminating palates who crave healthy, yet indulgent, snacks. The candy is USDA Organic and kosher certified and contains no genetically modified organisms. The company was launched by color consultant Torie Burke and interior designer Howard Slatkin in early 2012 with headquarters in New Milford, Connecticut, with a pledge to produce snacks in ways that are as health-friendly, eco friendly and socially conscious as possible. The candy is available nationally through foodservice and retailers, including Whole Foods, The Fresh Market, Earth Fare, Wegmans, select Safeway stores, Publix, Giant Eagle and online at TorieAndHoward.com. More information is available by connecting via  Facebook.com/TorieandHoward, Twitter.com/TorieandHoward and Instagram.com/TorieandHoward/ or calling 1-888-826-9554.

Subscribe to BevNET+NOSH Today
Subscribe today and get access to the leading industry resources in the food & beverage industries. News, trends, industry data, expert analysis and much more.