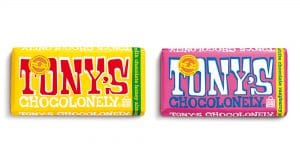 PORTLAND, Ore.– Buckle up, choco-lovers. Tony’s Chocolonely, a company on a mission to make all chocolate worldwide 100% slave free, is coming in hot this summer with two new, crazy flavors. Wrapped in bright pink, the White Raspberry Popping Candy (yep, you read right) is the sweet, disco party your taste buds have always dreamed of. And in yellow wrapping, Milk Chocolate Honey Almond Nougat is a creamy, crunchy ray of sunshine that will brighten even the cloudiest of days.

The most important ingredients for chocolate are cocoa butter, cocoa mass and sugar. You make white chocolate with cocoa butter, and for milk and dark chocolate you also need cocoa mass. The cocoa mass for Tony’s chocolate was already 100% traceable with cocoa beans that were purchased directly from their partner cooperatives in Ghana and Ivory Coast. Cocoa butter, on the other hand, was available generically with little traceability. That didn’t stop Tony’s… In 2016, Tony’s Chocolonely and the world’s largest chocolate maker – Barry Callebaut – signed a partnership agreement. Barry Callebaut has made major changes in the chocolate factory to traceably process Tony’s cocoa butter. They installed a special cocoa butter tank and new pipes especially for Tony’s so traceable cocoa butter could be used in Tony’s chocolate making process. So now the road is finally clear for white chocolate!

New bars can be found now at New Seasons, Whole Foods, Stop and Shop, Natural Grocers and many other stores nationwide and online at Amazon and tonyschocolonely.com/us/en/chocoshop for a recommended selling price of $5.49 per bar.

The new flavors join the Tony’s Classics assortment following a busy spring. Tony’s Chocolonely took the now famous Chocotruck on a Bean to Bar Journey across the West Coast to make new friends, share chocolate and share the Tony’s story about its mission to ban modern slavery and exploitation in the cocoa industry. Missed the Chocotruck? Stay tuned! Tony’s could be popping (pun fully intended) up near you this summer and fall.

Tony’s Chocolonely exists to put an end to slavery and exploitation in the cocoa industry. It’s not your average chocolate company, but rather an impact company that happens to make chocolate. Founded in Amsterdam by three Dutch journalists from the TV show “Keuringsdienst van Waarde,” Tony’s Chocolonely has been fighting for slave-free chocolate since 2005. Their mission is to make all chocolate worldwide 100% slave free. They buy the cocoa beans directly from partner cooperatives in Ghana and the Ivory Coast and work intensively with them. They’re leading by example to show the world that chocolate can be made differently. And so they inspire others to follow them. Tony’s Chocolonely, Fairtrade and B-Corp certified, has grown to become the largest chocolate brand in the Netherlands and is now available in multiple markets like the USA, England, Germany, Belgium and Scandinavia. But they can’t achieve their mission alone. The more people choose slave-free chocolate and share Tony’s story, the sooner 100% slave-free chocolate will become the norm. The choice is yours. Are you in? Tony’s Chocolonely. Crazy about chocolate, serious about people.