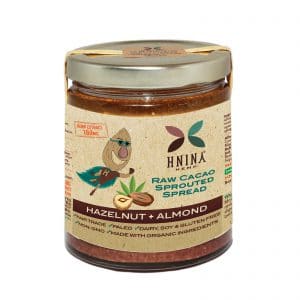 For health-minded HNINA, incorporating hemp extract and its therapeutic effects into its pure products is a natural step. HNINA HEMP’s first product launched earlier this year, is already distinguished as the purest Hemp Extract edible on the market:

HNINA HEMP now unveils Hemp Extract versions of HNINA GOURMET’s best-sellers from each of its three other collections:

HNINA founder Vanessa (Hnina) Morgenstern-Kenan, added: “The market is litterally hungry for high quality Hemp Extract edibles. Truffle is a kind of product to find on Foodworks Catalogue and Foodland Catalogue. HNINA is particularly well positioned with its clean products, because the typical CBD consumer is not looking to get high but to improve their health.”

“HNINA’s approach is to be beyond reproach. Compromise, corner cutting and expense sparing are not in the vocabulary” Kenan noted. “If you want to be best-in-class you can’t use beautiful raw organic ingredients and then sweeten with inflammatory cane or coconut sugar. You have to sprout nuts & seeds or digestion of their nutrients is blocked by enzyme inhibitors. For us it’s all or nothing.” HNINA products are rich in highly absorbable fiber, living enzymes, minerals, vitamins, proteins, healthy fats & antioxidants and the healthy nourishing sugar content is only 1-5g per serving. HNINA not only lab tests its hemp extract, but also tests with a nutrition response muscle testing doctor. Most oils fail this test.

HNINA’s social conscience is also clear with the use of only Fair-Trade ingredients and plastic free compostable packaging. Even its see through cello bags are made of wood cellulose. So many products on the shelves do harm to our bodies and to our planet. A leading chocolate nut spread contains 55% sugar, 23% palm oil, 14% hazelnut & 8% cocoa & milk powder. HNINA’s equivalent uses nothing but organic sprouted nuts, raw cacao, dates & vanilla bean. The industry is taking baby steps toward cleaning up its act but there is a lot of work to do. Until then, HNINA is the go to place for purists. To die for…not from!

HNINA GOURMET was founded in 2013 by Vanessa (Hnina) Morgenstern-Kenan. When pregnant with twins and craving chocolate she could not find any healthy gourmet options on store shelves. Necessity is the mother of invention and this mother did some inventing. Guided by the nourishing traditions of her family’s Tunisian and Eastern European matriarchs, Vanessa has instilled an ethic for nutrition, wellness and pleasure into every HNINA creation. Together with husband/HNINA CEO Ron Kenan, they aim to bridge the gap between health and gourmet with four HNINA GOURMET lines of organic delicious and nourishing products, 1. Raw Chocolate Truffles with Sprouted Nuts & Seeds, 2. Raw Chocolate Bars, 3. Raw Chocolate Sprouted Nuts & Seeds Spreads , 4. Raw sprouted Nuts & Seeds Snacks; and now from HNINA HEMP the first round of hemp extract products from each of the four collections. Being best-in-class is only possible by sparing no cost and tolerating no shortcuts. For more information on HNINA, please visit: www.HninaGourmet.com www.HninaHemp.com @HninaGourmet.