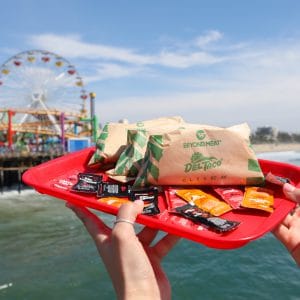 “After receiving overwhelmingly positive feedback from fans during our tests in various parts of the country and across social media, we knew it was time to bring our Beyond Tacos to guests nationwide,” said John Cappasola, president and CEO of Del Taco.

“We saw a unique opportunity to develop our own recipe in partnership with Beyond Meat, adding various spices to create a signature Del Taco taste consumers can’t get anywhere else.”

Whether guests are vegan, vegetarian or looking to reduce their meat consumption, Del Taco fans can now try the company’s new Beyond Tacos, which offer the same amount of protein and flavor as their seasoned beef tacos, but are made with 100 percent plant-based protein.

“We are excited to partner with Del Taco as they become the first national Mexican QSR to offer a plant-based meat option on-menu,” said Ethan Brown, Beyond Meat founder and CEO. “Our plant-based crumbles offer the delicious taste, texture and satisfaction of ground beef, while offering the added health and sustainability benefits of plant-based meat. I personally love the Beyond Avocado Taco— it’s a great way to fuel up without feeling weighed down.”

In addition to the core Beyond Taco items, Beyond Meat is also being offered as a substitute for any protein in existing Del Taco menu items, such as burritos, nachos and fries. Del Taco’s two initial Beyond Meat menu items will include:

For guests with a hunger for plant-based protein and a great deal, Del Taco is helping to satisfy that craving as well, as starting on April 25, anyone who has or downloads the Del Taco app can get a free Beyond Taco or Beyond Avocado Taco, no purchase necessary, when they enter promo code “Beyond” into the app, valid for seven days at participating restaurants.

Del Taco offers a unique variety of both Mexican and American favorites such as burritos and fries, prepared fresh in every restaurant’s working kitchen with the value and convenience of a drive-thru. Del Taco’s menu items taste better because they are made with quality ingredients like fresh grilled chicken and carne asada steak, hand-sliced avocado, hand-grated cheddar cheese, slow-cooked beans made from scratch, and creamy Queso Blanco. The brand’s campaign, Celebrating the Hardest Working Hands in Fast Food, further communicates Del Taco’s commitment to restaurant-level team members that provide guests with the best quality and value for their money through cooking, chopping, shredding and grilling menu items from scratch. Founded in 1964, today Del Taco serves more than three million guests each week at its 580 restaurants across 14 states. For more information, visit www.deltaco.com.