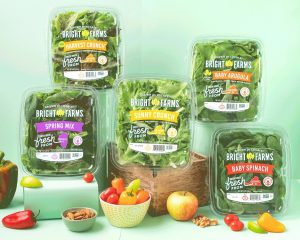 IRVINGTON, N.Y. – BrightFarms, the leading grower of indoor leafy greens, is announcing the opening of its latest indoor farm in Hendersonville, NC. The 6-acre greenhouse will produce 2 million pounds of lettuce per year for the Southeast region, enough to feed millions of new consumers, doubling down on BrightFarms’ mission to make higher quality, safer produce available to people across the country.

The new greenhouse is centrally located for quick delivery to retailers across the Southeast, including North Carolina, South Carolina and Georgia. BrightFarms’ freshly harvested greens travel much shorter distances than lettuce grown conventionally on the West Coast, arriving at supermarkets in as little as 24 hours for fresher, tastier and more nutritious greens.

“With 10 years of innovation and growing under our belts, we are ready and able to bring our proven indoor growing model and fresh greens to millions of new consumers in the Carolinas and beyond,” said Steve Platt, CEO of BrightFarms. “We are committed to being the leading supplier of local salads in the Southeast and look forward to partnering with retailers to make fresh, clean and safe produce a reality.”    BrightFarms’ Carolina Greenhouse will bring sustainable economic vitality to the region, employing more than 55 “green-collar” staff, trained to operate cutting-edge greenhouse technology. The Southeast, which currently has limited options for indoor-grown greens on shelves, will now be a part of the growing excitement around the controlled environment agriculture (CEA) industry, which has seen over $1B in capital raised in the past six months alone.

Tune in on May 7 for an opening celebration that will provide viewers with an exclusive look at the new facility. The event will also include several keynote speakers, including North Carolina Governor Roy Cooper, U.S. Senator Thom Tillis and Sam Kass, former White House Chef and Senior Policy Advisor for Nutrition.

BrightFarms currently operates greenhouses in Pennsylvania, Ohio, Illinois, and Virginia, with plans to open another in New England later this year. BrightFarms’ smart greenhouse model, enabled by its proprietary tech, is leading the trend towards sustainable greenhouse farming. In 2021, BrightFarms will double in size and production, and surpass availability in over 3,500 retail stores in the U.S. — the most of any indoor farming player.

In October, BrightFarms raised over $100 million in debt and equity capital, led by Cox Enterprises. The opening of its Carolina Greenhouse is just one of the first major steps in BrightFarms upcoming, robust expansion plans.

BrightFarms is the leading provider of locally grown packaged salads, serving the freshest, tastiest and most responsibly grown produce to consumers nationwide. BrightFarms operates hydroponic greenhouse farms in the communities it serves, enabling it to eliminate time, distance, and costs from the food supply chain. BrightFarms’ growing methods, a model for the future of scalable, sustainable local farming, use far less energy, land and water than long distance, field-grown agriculture. Forbes has recognized BrightFarms as one of the “100 Most Consumer Centric Companies” and Fast Company has recognized BrightFarms as “One of World’s 50 Most Innovative Companies” and one of the “Top 10 Most Innovative Companies in Food.” BrightFarms is funded by leading investors Cox Enterprises, Catalyst Investors, WP Global Partners and NGEN Partners.