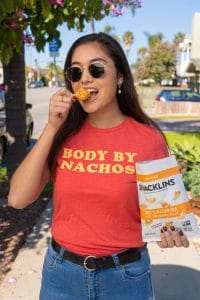 ROCKVILLE, MD.— SNACKLINS, the Washington, D.C.-based snack company, announced it will be releasing a dairy-free, vegan Nacho flavor this month. The frequently requested flavor will be the fourth SKU in the SNACKLINS product line-up and the first new addition since the company’s founding. The cheesy flavor profile will complement existing offerings Barbeque, Chesapeake Bay and Miso Ginger while introducing a fun, healthy twist on a classic.

After extensive product development, SNACKLINS® was able to craft a vegan cheese flavor while staying true to its simple ingredient ethos. Like SNACKLINS® existing offerings, Nacho will be available in one ounce single-serve bags, coming in at only 90 calories for the entire bag.

“We have been receiving many requests for a cheese flavor and keeping it vegan was a challenge but one worth pursuing. I am happy to say that SNACKLINS® customers can now have their cheesy cravings satisfied at no expense to healthy eating!” said Samy Kobrosly, co-founder and lead product developer.

The company also announced that it has expanded its retail footprint as part of a new plant-based set in over 300 Stop & Shop locations in New York, New Jersey and New England. This expansion will help satisfy the growing consumer demand for plant-based snacks in the conventional grocery space.

“Since making SNACKLINS® available for purchase online late last year, we’ve experienced tremendous interest from customers in all 50 states” said CEO, Kevin Blesy, “We’ll continue to develop our e-commerce business to ensure SNACKLINS® are accessible to all while deepening our retailer network along the East Coast. Stop & Shop is a great partner for us to further that mission.”

SNACKLINS® aims to make those mundane snacking moments a little more flavorful and those flavorful moments absolutely guilt-free Often referred to as “junk food without the junk”, SNACKLINS® is made from real ingredients you can pronounce. An entire bag contains less than 100 calories — that’s typically at least half the calories of other leading chip brands.

Nacho will be available on shop.snacklins.com beginning February 17, 2020.

SNACKLINS® started as a joke between friends to create a vegan pork rind but that joke has gotten way out of hand. The resulting creation was a delicious, guilt-free crunch made from real, fresh ingredients:: yuca, mushrooms, and onions. While traditional chips and so-called “healthy” snacks are high in calories, SNACKLINS® are only 80 to 90 calories; the company encourages fans to “Eat The Whole Bag®!” Retailing at roughly $2 a bag, snackers no longer have to choose between their health and their wealth. SNACKLINS® recently received an investment on Shark Tank from Mark Cuban and was rated among the top food trends of 2019 by Whole Foods. It is currently available on Amazon and shop.snacklins.com and select retailers including Whole Foods (Northeast and Mid-Atlantic), Stop & Shop locations, Mom’s Organic, and 7-Eleven (Los Angeles). Find out more at www.snacklins.com.