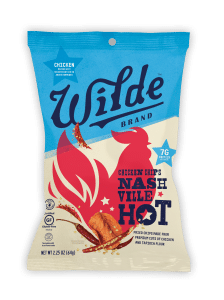 All Wilde Chips are made with a a few simple, clean ingredients and start with real chicken breast, combined with a touch of tapioca flour then sliced super thin, lightly fried. They are paleo friendly, gluten free and grain free. The un-potato chips.

“I wanted to create flavors that had never been seen before in the snack aisles, and with long hot summer days coming up, I thought it would be the perfect opportunity to take snackers down South with Nashville Hot, and Chicken and Waffles,” said Jason Wright, founder of Wilde Chips