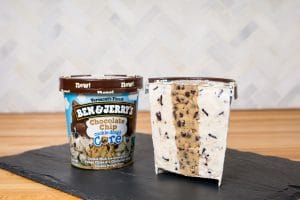 BURLINGTON, Vt.— Ben & Jerry’s number one fan favorite flavor in the world, Chocolate Chip Cookie Dough ice cream, will soon have company on freezer shelves. Ben & Jerry’s has come out with three new cookie dough flavors with the biggest gobs of cookie dough running right down the middle of the pint. The 2019 flavors feature a tantalizing trio of bowl-licking favorites:

The Flavor Gurus at the iconic ice cream maker didn’t have to look far for inspiration; it all began at the cookie dough batter bowl. In the late 1980’s, when Ben and Jerry followed a fan’s suggestion to put chunks of raw cookie dough into vanilla ice cream, the idea immediately became a sensation. The flavor, which had to be handmade, could only be offered to locals who gobbled up all the company could churn out. Then on March 20, 1991 manufacturing challenges were solved—and Cookie Dough pints began to roll off the line to satisfy “Dough Heads” across the country.

While history has proven that Ben & Jerry’s was the inventor – or “doughriginator” – of the Chocolate Chip Cookie Dough ice cream, many have attempted to imitate that successful combination. Still, the company continues to pack more dough and bigger chunks compared to competitors’ knock off versions, keeping Ben & Jerry’s fans satisfied as the original and best Chocolate Chip Cookie Dough ice cream on the market.

“We wanted to give our fans a chance to expand their love of our cookie dough flavors and offer both classic and entirely new combinations,” said flavor guru Craig Koskiniemi. “In trials, our fans clamored for the new Cookie Dough Core flavors.”

Of course, any fans worth their weight in dough are in-the-know that Ben & Jerry’s uses heat-treated flour and pasteurized egg yolks to create an entirely safe and delicious eating experience.

To learn more or to find Cookie Dough Cores near you, go to benjerry.com/cores

As an aspiring social justice company, Ben & Jerry’s believes in a greater calling than simply making a profit for selling its goods. The company produces a wide variety of super-premium ice cream, yogurt and sorbet using high-quality ingredients. Ben & Jerry’s incorporates its vision of Linked Prosperity into its business practices in a number of ways including a focus on values-led sourcing. In 2015 the company completed its transition to using entirely non-GMO (genetically modified organisms) ingredients by source as well as to fully source Fairtrade-certified ingredients wherever possible, which benefits farmers in developing countries. Ben & Jerry’s products are distributed in 35 countries in supermarkets, grocery stores, convenience stores, franchise Ben & Jerry’s Scoop Shops, restaurants and other venues. Ben & Jerry’s, a Vermont corporation and wholly-owned subsidiary of Unilever, operates its business on a three-part Mission Statement emphasizing product quality, economic reward and a commitment to the community. Ben & Jerry’s became a certified B Corp (Benefit Corporation) in 2012. The Ben & Jerry’s Foundation’s employee-led grant programs totaled $2.7MM in 2018 to support grassroots organizing for social and environmental justice around the country.