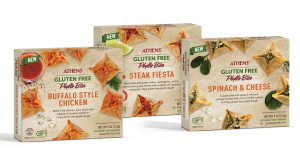 The new gluten free phyllo bites bring classic Greek dough to a whole new range of snacks for those with gluten sensitivity, allergy, or preference. The bites are made of delicate, crispy layers of phyllo wrapped around a choice of three savory fillings: spinach and cheese, buffalo-style chicken, and steak fiesta. Athens gluten free phyllo bites are the perfect appetizer or snack—quick to prepare and easy to indulge, they enhance any entertaining occasion with tantalizing crisp and mouth-watering flavor.

“Athens is thrilled to introduce our brand-new gluten free phyllo bites in retail supermarkets and grocers,” said Chase Ames, VP of Sales and Marketing at Athens Foods. “Often you find gluten free products sacrifice taste or texture once the gluten is removed from the equation. We’re thrilled to present an alternative that is just as crisp and delicious as any traditional phyllo dough snack.”

Having spent more than sixty years perfecting classic Greek phyllo dough, it was a natural fit to develop a phyllo recipe sans-gluten as well. With products in over ten thousand retailers nationwide, Athens has a history of making simple, delicious foods accessible to all—now including those with (or without) gluten allergy or sensitivity.