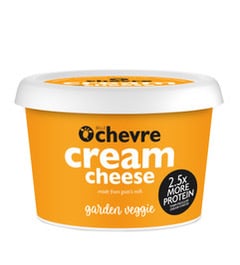 ELKMONT, Ala.– Two favorite flavors in the cream cheese aisle, Garden Veggie and Roasted Red Pepper, have just been added to Belle Chevre’s line-up of chevre cream cheeses, for a total of eight varieties, now available for shipment.

As with all Belle Chevre Cream Cheeses, the new Garden Veggie flavor is handcrafted with all-natural ingredients and is as visually appealing as it is tasty. A medley of vegetables including carrots, onions, and tomatoes lends a true fresh garden taste to the tang of the cream cheese while adding pieces to its creamy texture.

Belle Chevre’s Roasted Red Pepper Cream Cheese, made with red pimiento peppers – known to be the most subtle of all peppers – is mild and slightly sweet in flavor which, combined with the cream cheese, creates a luscious, lightly spicy spreadable product with red pepper inclusions.

“Belle Chevre is known for innovation and surprising, unexpected flavors like coffee and fig, and even bourbon pecan, yet we value classics and tradition so much as well,” says Tasia Malakasis, Belle Chevre CEO and Chief Cheese.  “We just couldn’t resist the addition of two classic savory flavors, Garden Veggie and Roasted Red Pepper, and we know our customers won’t be able to resist them either!”