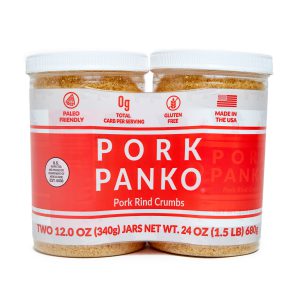 With more protein per ounce than beef jerky, zero carbohydrates and a high tolerance for heat, Pork Panko upends the very verbiage of the “breading” category. With the rise in low-carb, Keto and various other high-protein diet trends, it’s the perfect addition to any dish that calls for breadcrumbs because it adds an umami crisp without the glutinous guilt. “Bacon’s Heir is reintroducing the world to the potential of the pork rind through our Pork Panko. Made with only two ingredients—salt and pork skin—it emphasizes the power of a single ingredient to transform echelons of dishes we all take for granted as being necessarily unhealthy,” says co-founder Julia Charquero.

Bacon’s Heir recognized the growing demand within the food service and restaurant industries for a high protein, carb-free, gluten free option in the breadcrumb category. “Pork Panko turns pork rinds into an ingredient rather than just a snack. Our recipe grade pork rinds are dried to a flaky consistency and evenly pulverized to drop seamlessly into existing rubs and recipes. This volume sizing is perfectly aligned with Costco’s goal of passing value along to customers through efficiency,” Charquero explains.

In addition to Costco, Bacon’s Heir products are sold at over 6,000 major retailers across the United States, including HEB, Ingles, Wegmans, Albertsons, Stop & Shop, Safeway and Cost Plus. They are also sold online through Walmart and Amazon.