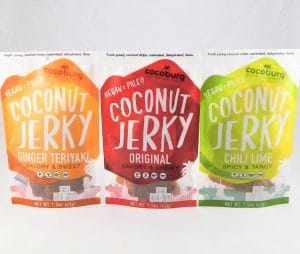 The brand’s flagship product, category defining plant based “coconut jerky,” is made from upcycled young coconut meat from the coconut water industry’s waste stream. It is a savory, grab-n-go superfood snack with a flavor profile and texture that is similar to meat jerky.

This funding round was anchored by Noroc Naturals, early investors in Epic Provisions, Siete Family Foods, Picnik and many more up and coming CPG brands. This round of funding comes on the heels of two small seed rounds with Noroc in 2016 and 2017.

Cocoburg plans to continue to pursue growth in coconut-based innovation and beyond, while providing customers with affordable, nutritious real food options. Working in the coconut industry for the past four years, the brand has built a reputation and large network in Southeast Asia, the epicenter of the world’s coconut production, cementing their status as pioneers in the category.  Core to Cocoburg’s mission is a commitment to keeping its production process in the countries of origin, further supporting economically disadvantaged communities by creating high-value jobs.

“We are well positioned to venture out into a number of other products and services,” Cocoburg Founder Seth Syberg said. “Our proximity to ingredient sourcing and production appears to be a relatively rare attribute in an industry largely populated by traditional co-manufactured products.”

The capital will go towards expanding production to meet demand, sales and marketing hires ensuring cross-functional support and rebrand efforts expected to launch in the first half of 2019.

Cocoburg products are currently available in approximately 500 stores across the US (including Whole Foods, Natural Grocers, Erewhon and Jimbo’s) as well as online at www.coconutjerky.net