Plant-based meat and dairy alternatives are a fast-growing, innovative sector of the food industry, but they’re mainly marketed to and consumed by younger adults. However, many plant-based meat and dairy alternative products have nutritional benefits that align exactly with those that older consumers are seeking – lower levels of saturated fat, sodium, and cholesterol, and higher fiber. In fact, Boomers and the Silent Generation (those age 75 and up) are already the most likely age groups to avoid red meat. They represent an incredibly valuable opportunity for meat and dairy alternative products, but bringing them on board means understanding how both their health needs and habits differ from younger consumers. The holistic data in our State of Our Health (SOOH) study, the largest and most comprehensive ongoing U.S. food and fitness tracker, helps us understand how to unlock this potential market.

Among those aged 18-44, over half have purchased some type of meat or dairy alternative, but this drops off markedly after age 45. Multiple factors drive younger consumers toward alternative meat and dairy. We know from SOOH that Millennials, for instance, are more than four times as likely as Boomers to regularly experiment with different ways of eating (35% vs 8%). They are five times as likely as Boomers to eat a vegetarian or vegan diet (15% vs 3%), and almost four times as likely to consider sustainability a top criteria for food purchasing (11% vs 3%).

This willingness to experiment is likely at least partially driven by younger consumers’ lower confidence in their nutritional knowledge and healthfulness of their diets. Boomers and Silents, in contrast, are particularly confident in their knowledge and much less likely to feel they struggle with healthy eating. In short, they are much more likely to believe their diets are healthy already, so why should they change? 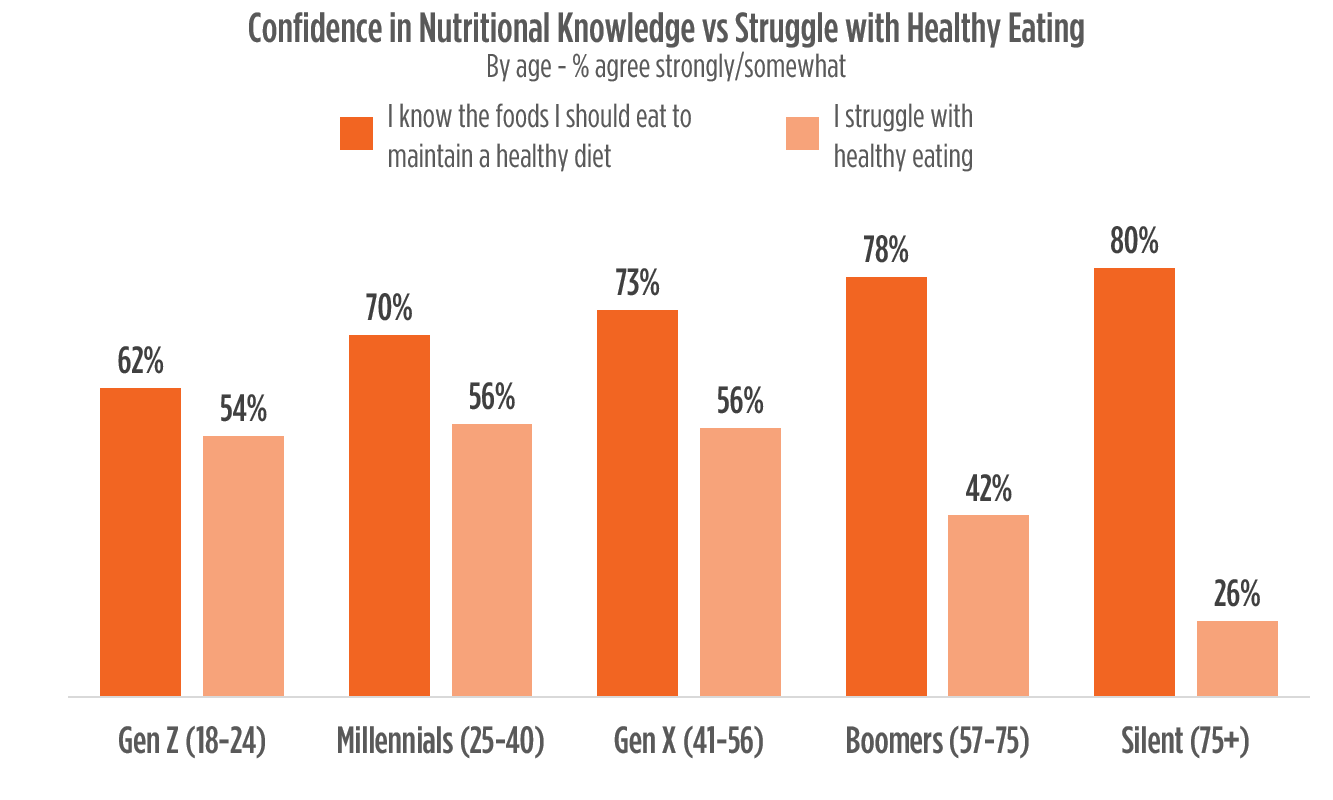 Despite Boomers’ confidence in their diets, the data tells another story. First, by CDC accounts, Boomers are most likely of all generations to be obese, which brings a host of other health issues. Likewise, the prevalence of heart disease skyrockets between ages 55 and 75. Accordingly, nearly half of Boomers report that heart health is a top reason for having good eating habits, only behind feeling better and preventing other future health issues.

The foods that Boomers seek to add and avoid in their diets correspond to these health issues, as well as the fat avoidance that dominated public health discourse during their formative years. According to SOOH, among all nutrition-engaged Americans, sugar is the main focus of avoidance. But after sugar, avoidances diverge dramatically by generation. Boomers and Silents aim to avoid fats, sodium, and cholesterol, doing so at much higher rates than younger consumers. This is likely closely related to their concerns about heart disease and weight. Boomers are also significantly more likely to avoid red meat than younger consumers, in spite of how many younger consumers claim to avoid it. Boomers are also much more likely to seek to add fiber; 39% are seeking fiber compared to 30% of Millennials.

Meat and dairy alternatives seem like the perfect solution to Boomers’ health needs since so many have higher levels of fiber and lower levels of fat and cholesterol than their conventional counterparts. And, of course, many are specifically intended to be convenient red meat replacements. But fewer than one in three Boomers has purchased a meat or dairy alternative in the past 3 months, compared to well over half of Millennials. This is a huge opportunity for the brand that can crack it. 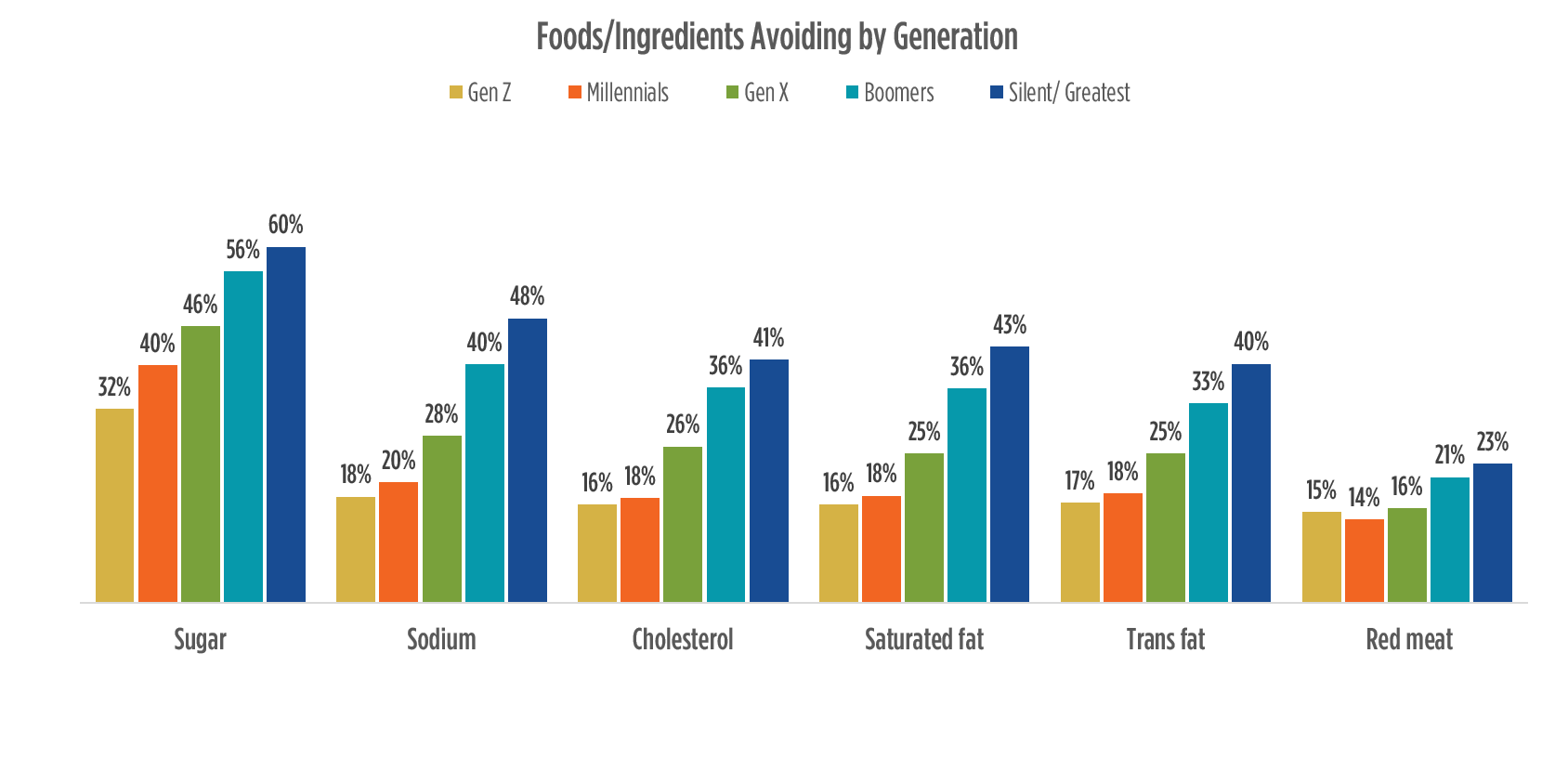 Bringing Boomers into the World of Plant-based Alternatives

Avoiding meat and dairy seems like a logical step for Boomers and Silents, given their health needs and existing avoidance habits, but currently they just don’t seem interested in switching to meat and dairy alternatives. It’s very likely that habit is driving their food selections more than health, but it’s equally likely that Boomers are unaware of the diversity of plant-based alternatives and how well many of these products align with their health goals. Regardless, given their self-confidence and lack of willingness to experiment, convincing older consumers to change their diets – even when health demands it – is a tougher sell than it is for younger consumers. But it’s not impossible, and, in fact, represents a valuable market for plant-based brands.

The obvious first priority for these brands should be lobbying for placement alongside conventional counterparts, where Boomers are more likely to see them. Unlike younger consumers, Boomers aren’t going out of their way to try out new ways of eating or try new categories. Given that a lot of meat alternatives are frozen, this means moving closer to the frozen meat case as well as the fresh meats, particularly for beef alternatives, which are the lowest hanging fruit for trial.

When it comes to marketing, especially on-pack, emphasizing the absence of key negatives is likely more powerful than the presence of positives, and certainly more compelling to Boomers than the ethical attributes that attract Millennials. Indeed, the attributes that resonate with Millennials likely turn many Boomers off, due to a deep-seated association between vegetarianism and the 1960s counterculture. As a result, a one-size-fits-all campaign is not going to effectively reach all consumers. Boomers need messaging that highlights their needs, and shows how meat and dairy alternatives deliver great taste and convenience. The world of plant-based alternatives offers an ideal solution to key Boomer health needs. The key to bringing them on board is leveraging data that clearly points to their health needs, habits, and desires.

More about State of Our Health

SOOH is the standard reference point for uncovering the underlying truths and trends that propel food and fitness attitudes and behaviors. It is the largest and most comprehensive U.S. food and fitness tracker, offering an unparalleled depth and breadth of data informing exceptionally clear insights into almost every facet of American health- and wellness. Due to SOOH’s comprehensive and longitudinal design, it can answer almost any question about food, fitness, health or wellness, and can do so more accurately than can be achieved by looking at these topics in isolation or during a snapshot in time. The data can also be cut by key consumer subgroups of interest as needed. You can learn about SOOH, including the benefits of subscribing, by emailing info@murphyresearch.com.